This article is written by Gillian Howell – Tura’s current Musician in Residence in Fitzroy Crossing, Kimberley, WA. This is part of a three year program supported by Healthway, promoting the Act-Belong-Commit message, and The Ian Potter Foundation.

Residencies are always full of surprises and unexpected turns and it’s good to build in time to let things unfold according to their own rhythm and direction. I’ve now finished the first week of my second residency in Fitzroy Crossing, and it’s been a week of reconnecting with some of the people and groups I worked with in September 2017, catching up on what’s new and what’s changed, and firing up some new relationships and creative projects.

First stop the Marninwarntikura Women’s Resource Centre and their trauma-informed programming supporting women in the Fitzroy Valley. Last time I was here, Marnin (as the centre is known) had initiated a series of weekly Nurturing Nights for local women, creating a beautiful, peaceful, supportive space where women could come to relax, talk with each other, and share a meal. I developed activities around ‘music and healing’ for this program, introducing instruments with potential to steady heart-rates and respiration, and creative ways of coming together and sharing experiences through simple, quiet songs. During those first Music and Healing sessions, I was focused on the adult women. In this week’s session, I found that there was tremendous value in me working more directly with the children. When their children that came to the evenings along with their mums were engaged and absorbed in exploring these beautiful instruments and their sounds, their mums were free to speak with each other and focus on those conversations. What’s more, the children’s music-making had the added effect of ‘masking’ the aural space, creating more privacy for the conversations. The sounds we made were not loud, but they created aural ‘baffles’, behind which difficult conversations could take place. So we learned a new (or additional) role for music in the Nurturing Nights this last week. 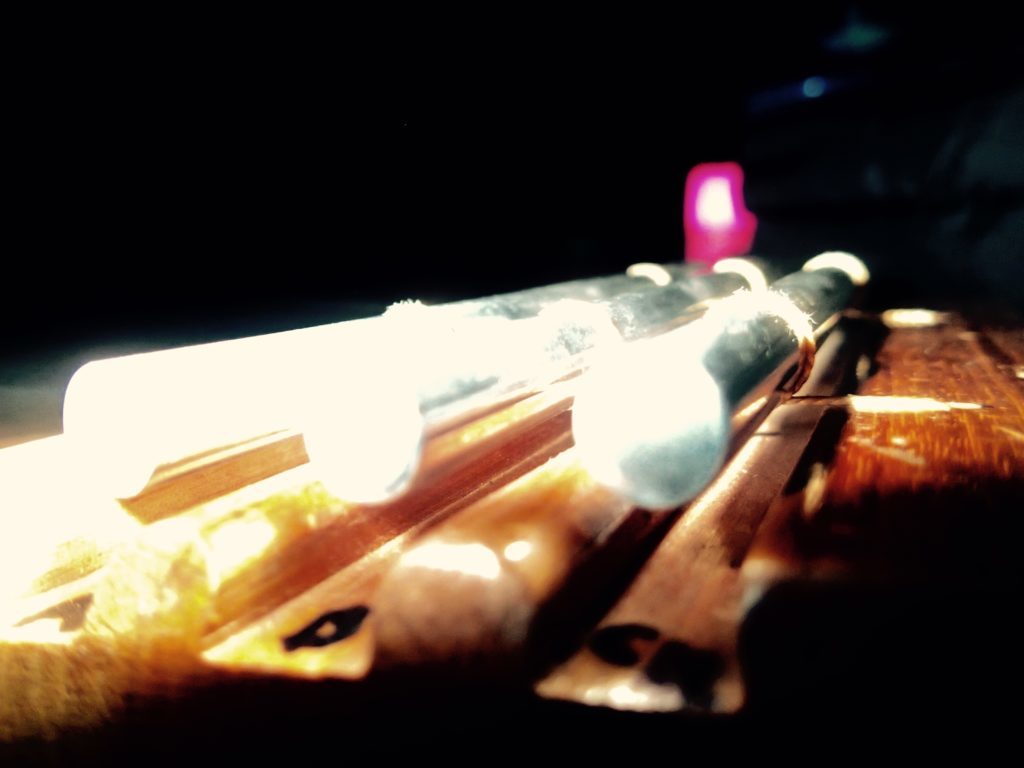 Photo taken by one of the children participating in the Music and Healing session at Marnin – a particularly dramatic abstract shot of an energy chime.

Much of my time each day is spent with young people. Most mornings this week I’ve been at Baya Gawiy, the beautiful, purpose-built early learning centre run by Marnin for the Fitzroy Valley’s youngest kids. I rock up with my ukulele, chat or play with the children and their teachers, and offer a song or two each visit. Most importantly, I’ve been connecting with one staff member and her dad who have started writing original songs for the children. The songs including words any of the five local languages of Fitzroy Crossing, as well as Kriol and English, attesting to the commitment to keeping the languages alive and in use in daily life. We are planning to develop some music-based ‘journey’ workshops for early years together. I’ve made a start on one that I’ll present next week. 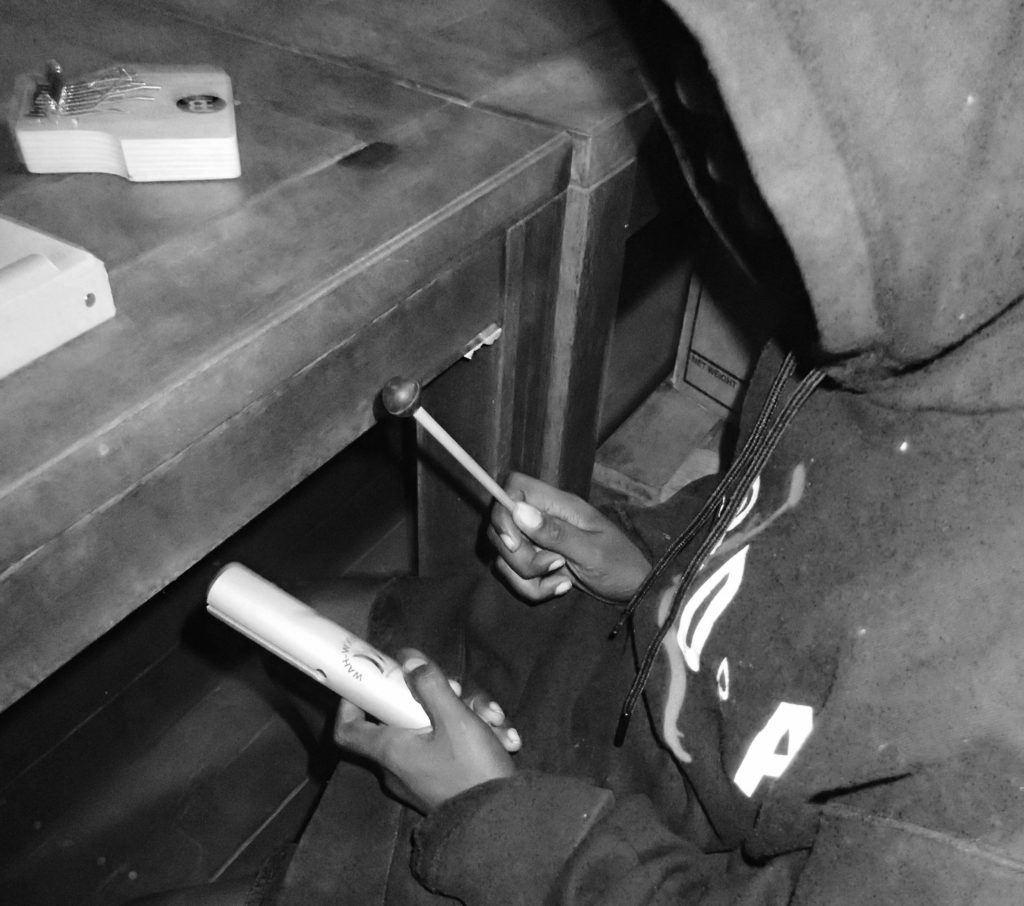 Up at the Fitzroy Valley District High School (which includes primary as well as secondary classes), I’ve led music workshops with each of the primary classes. I’ve also spent time with the Language and Culture team of Indigenous teachers, learning more about their program and the innovative ways that they integrate language and cultural knowledge into the learning programs of each age group. Together with the upper primary teachers, we’ve devised a composition project for next week that will develop 2-3 pieces of original music depicting events in the life of Jandamarra, a Bunuba man and legendary hero of the Kimberley who led the Bunuba people’s resistance against pastoralist expansion and land appropriation in the 1890s. This ties in beautifully with the theme for National Reconciliation Week 2018 (27 May – 3 June): “Don’t keep history a mystery. Learn. Share. Grow.”

Plus there are some interesting musical conversations happening with the Senior students that I worked with last year, including a recording project in the offing for next week. All of these projects engage in different ways with the central goals of the residency, to use music as a way to encourage participation and engagement with new things and ideas (‘Act’); explore identity, place and belonging (‘Belong’); and to support individuals to experiment, dream big, make plans, and initiate (‘Commit’). All in all, there is a lot going on and it is great to be back in the Fitzroy Valley.