A poetic walk through the ‘Northern ‘burbs of Boorloo’. Blissful moments, alongside many fearful ones. Feelings of uncertainty, and of trepidation, afraid that things may indeed return to business as usual.

Last year I independently printed a zine of the same name, featuring some poetry and iPhone-quality pics of green bins, Perth rooftops at golden hour, and forgotten chairs in music venue bathrooms. This piece doesn’t share any text with that zine (although it does share some sentiment).

I’ve been living in some mundane oasis here in the Northern ‘burbs of Boorloo, blessed with many blissful moments, alongside many fearful ones. Feelings of uncertainty, and of trepidation, afraid that things may indeed return to business as usual, even after having had the chance to pause and ponder how fucked-up business as usual really is. These months of isolation have made some room for political thought and discontentedness to simmer in all of us (I hope). An overwhelming anxiety at the state of Australia and the world is unshakable some cloudy afternoons. But putting these fearful moments aside, here are some of the blissful ones:

Indulging in weekday mornings in bed with a beloved, no meeting nor rehearsal in sight (!)

Yelling in the rain alongside ten thousand protesters, allies, friends.

Learning the Noongar word gnamma, or namma, meaning a natural hole in a rock in which rainwater collects.

Having the hopeful feeling that things are collecting here in the ‘burbs, too.

lately I have been
while the bougainvillea / trails
Yeah, it’s morning where I am
green bins toppled
purple flowers takin’ it up with
vacant block / oasis

a lemon takes a long time to grow
especially on the little limb
potted tree out front
When life gives you lemon: ask it to grow faster.

I am always fearful lately
I walk up Shaftesbury
down Catherine
through that strange
not-park, not-road, something of a grassed area between two rows of houses
I forget the name of it
but I know there’s a sign printed with pictographs warning:

No dogs off-leash; No dog poo; No golf.

As if anyone were wishing to putt there.

then again, everyone’s wishing to put it in somewhere
and here you are a relishing recipient
Your boyish charm, No false bravado,
O, a fearless receiver are you 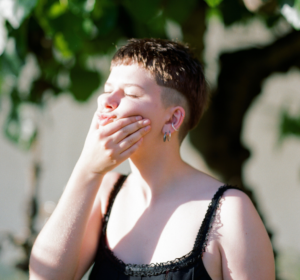 Annika Moses is an emerging sound artist working on Whadjuk Noongar boodja, Perth Western Australia. Her practice is a sprawling affair, writing and performing under various monikers including her alt-folk act Nika Mo and the elusive weird-pop persona Great Statue, as well as writing ensemble and radiophonic works under her own name.

Annika is involved in the Perth arts scene as an independent organiser and curator, as co-director of local label Tone List, and as a member of the Difficult Listening collective on community radio station RTRFM. She has toured the South West extensively with local experimental series Outcome Unknown. As Tura New Music’s Curatorial Intern in 2019, Annika took part in The Sonus Tour across the Kimberley region, and the Kimberley Indonesia Project Phase Two, taking place in Yogyakarta. In 2019 Annika completed a Bachelor of Music: Honours (WAAPA), studying radio arts with a feminist focus.

This piece was written and recorded in Boorloo, on Whadjuk Noongar boodja. I acknowledge Elders past and present. Always was, always will be, Aboriginal land. Thanks to Tura for commissioning this piece through @TheRoots program. Thank you to Pip Lewi for their illustration, (inspired by the green bin in the RTRFM carpark, may it be forever remembered). Thanks to Nate Wood for recording the violin parts. This piece samples an improvisation by myself and Alex Jones (aka Whitegums), recorded in 2017.