Take a wild ride through the deserted city and suburbs of Perth and Fremantle during the lockdown in March and April of 2020. An archival snapshot of the city as a ghost town devoid of people in isolation, capturing the mood of uncertainty and anxiety early in the massive global social disruption from a local perspective.

ÜBERVESPERS was commissioned as part of the Tura Adapts 2020 Commissions No Borders – see more commissions here.

ÜBERVESPERS is a single shot digital video filmed and scored by Leon Ewing as Sonnenmasse.
Captured by a GOPRO mounted to the front wheel of a Vespa LX50, the footage documents Perth during the first Covid lockdowns of 2020… in the employ of Uber Eats delivery.
Unlike the arts or culture, the work was an essential service, keeping the people fed, the wolves from the door, and a license to venture into the unknown.
It was an eerily dystopian and surreal experience; and the images are reminiscent of Claude Lelouch’s, ‘C’était Un Rende-vous’, or of the road sequences in David Lynch’s ‘Lost Highway’.
It also functions as a museum piece, an archival snapshot of a moment time, and an architectural study of desolate streetscapes that would ordinarily be bustling with day to day life…
as much as the Perth CBD ever truly bustles.
Sonically, the work is underscored by droning and reverberant bass guitar, manipulated tape loops, and guest vocals by Meow Meow. 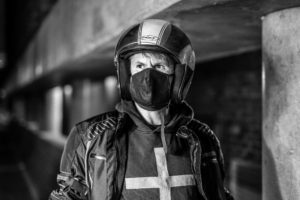 Leon Ewing is a bass soloist and vocalist from Perth.

Often working site specifically, playing to and against the resonant frequencies and standing waves of architectural spaces, including vaults, galleries, concert halls, and stadiums,  designing sublime and exclusive sensory experiences of built environments.

The project began as ‘Raised by Brutalism’, a one on one performance in a stairwell in the AGWA for the Proximity Festival, and evolved into ‘Intra Harena’; a stadium show for two people at the Perth Arena, winning the Spirit Award in Fringeworld.

Current work includes the development of ‘Savasana’; a death meditation of Vedic chanting for the practice of doom metal yoga.