Still attempts to reproduce the experience of losing track of points in time. To be listened to on repeat while the listener is engaged in some other quiet and solitary activity.

Still by Dylan Crismani was commissioned as part of the Tura Adapts 2020 Commissions No Borders – see more commissions here.

Still attempts to depict my recent personal experience of life in isolation. During the recent international lockdowns, resulting from COVID-19, I experienced periods of time where the days and weeks seemed to blend imperceptibly into one another with each passing day and week only subtly different from the next. I have attempted to reproduce this experience of losing track of reference points in time through a piece of music. A single melody has been designed to replicate this feeling. The melody is so slow and void of rhythmic variation that while your mind can follow a few notes, it becomes quite difficult to remember the melody as a whole because of the speed at which it unfolds. In addition to the concept of losing track of points in time, Still is also a very quiet piece of music. The quiet nature of the piece reflects quite literally, the international response to the pandemic, while also encouraging the audience to find a quiet place to experience the piece. Still attempts to engage the listener through subtle changes in tone colour, both through the use of microtones superposed upon one another and through exploring a small number of the timbral possibilities of the Cristal Baschet. The very slow, quiet, and sparse nature of the piece allows the listener to experience the subtle shifts in sonic texture which occur when two notes that are almost in perfect unison with one another are sounded simultaneously.

The Cristal Baschet is an instrument of French origin, designed by two brothers François and Bernard Baschet in 1952. The cristalist (person who plays a Cristal Baschet) produces sound by rubbing wet glass rods, the rods transfer energy into long steel bolts which become excited and produce pitched vibrations. The Cristal Baschets used in this recording are a microtonal variation on the original design, and are possibly the only instruments of their kind in Australia. The Cristal Baschets used in this piece were commissioned by Arts SA and Soundstream New Music in 2020. Still is the second piece commissioned for these instruments, but the first to be officially released. The Cristal Baschet is capable of producing a broad and interesting array of tone colours, some sounds in the recording seem synthesised, others seem to mimic techniques applied by classical string instruments, and other possible timbres (not used in this piece) include sounds similar to woodwind instruments and the didgeridoo. A digital delay pedal has been used in Still simply to achieve a sustain effect but the curious and unusual timbres produced in this piece are a result of the Cristal’s unique design.

Still is designed to be listened to on repeat while the listener is engaged in some other quiet and solitary activity. To aid in this endeavour Still is discreet enough for the listener to ignore it to quite an extent, while also containing enough variation to keep active listeners engaged in the subtle levels of change. 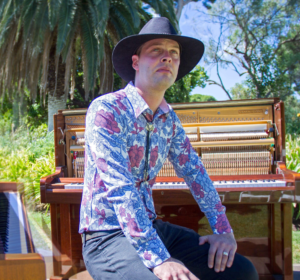 Dylan Crismani (b.1987) recently graduated from a PhD in musical composition at the Elder Conservatorium of Music, University of Adelaide, winning a Dean’s commendation, and a doctoral research medal for his composition-based thesis. Dylan’s research was funded by a Faculty of the Arts scholarship, supervised by Charles Bodman Rae and Stephen Whittington. In 2019 Dylan’s composition The tale of Kiều was selected for performance in the prestigious Basel Composition Competition, Switzerland. Recently Dylan has been awarded Arts SA funding to build a microtonal Cristal Baschet and compose an extended Cristal Baschet work for Gabriella Smart. Dylan’s music aims to fuse the best elements of American minimalism, in terms of form and continuity, with European spectralism, in terms of sonority. Dylan’s musical compositions have been performed by the Basel Chamber Orchestra, the Australian String Quartet, Gabriella Smart, Sonya Lifschitz, Lisa Moore, the Elder Conservatorium Symphony Orchestra, and the Adelaide Youth Sinfonia.