Since its inception in 1984, The Song Company has evolved into one of the world’s most interesting and critically acclaimed vocal ensembles. With a repertoire encompassing everything from 10th Century vocal music to contemporary avant garde, The Song Company’s stylistic diversity has earned it an impressive following at home and abroad. Under the Artistic Directorship of Roland Peelman, this six-voice ensemble regularly tours to such renowned events as the Dubrovnik Festival, MDR Sommerfest, Festival of Flanders, and the Melbourne International Festival of the Arts.

Successfully integrating serious scholarship with tonal beauty, vocal daring and unbridled performance dynamics, The Song Company is a music experience not to be missed.

“An astonishing display of ensemble virtuosity.” The Sydney Morning Herald

“The human voice is an amazing thing and none demonstrate this better than the six singers of The Song Company. Their concentration, precision and sheer stamina are evident throughout as one, two or more repeat the various mantras with razor sharp rhythm.” The Sydney Morning Herald

“music making of the highest order” The Australian

Dutch composer Michel van der Aa is one of Europe’s most sought-after contemporary composers. For van der Aa, music is more than just organised sound or structured notes. Rather, his music possesses expressive power and an idiomatic stage sensibility comprised of ever-changing combinations of sounds, images, poetry, the virtual and the real.

van der Aa studied composition with Diderik Wagenaar, Gilius van Bergeijk and Louis Andriessen, as well as film-making and direction at the New York Film Academy. Michel is the winner of numerous international awards, including the prestigious 2006 Paul Hindemith Prize. 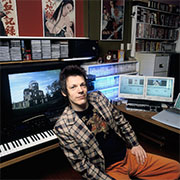 Philip Brophy has scored and sound-designed his own films as well as numerous other works. Extending across film, video and audio, his current audiovisual projects include the performance of live music to videos/films (the Beautiful Cyborg Series and Aurévélateur); Dolby 5.1 video installations (Fluorescent and Evaporated Music); as well as live surround-sound performances (Voiceless and I Am Piano).

Having created the Soundtrack Stream in Media Arts at RMIT, Philip continues to lecture and publish internationally on film, sound, and music. His recent publications include 100 Modern Soundtracks for the British Film Institute, London.