Romantic Echoes of a Sleeping Building & of the Sleepers Who Inhabit It:
A response to Sunset (Maxine Doyle; Rachael Dease)

The stage director of Sunset, Maxine Doyle, notes that she was partly inspired by the Classical story of Persephone, who was separated from her mother, the goddess Demeter. I would however suggest that another Greek myth provides a better metaphor for this production, namely that of Echo, scorned by her lover and so condemned to call out from a distance in the hope of reaching the lost object of her affections. Sunset was scored by Rachael Dease, and produced by Strut Dance in association with Tura New Music. 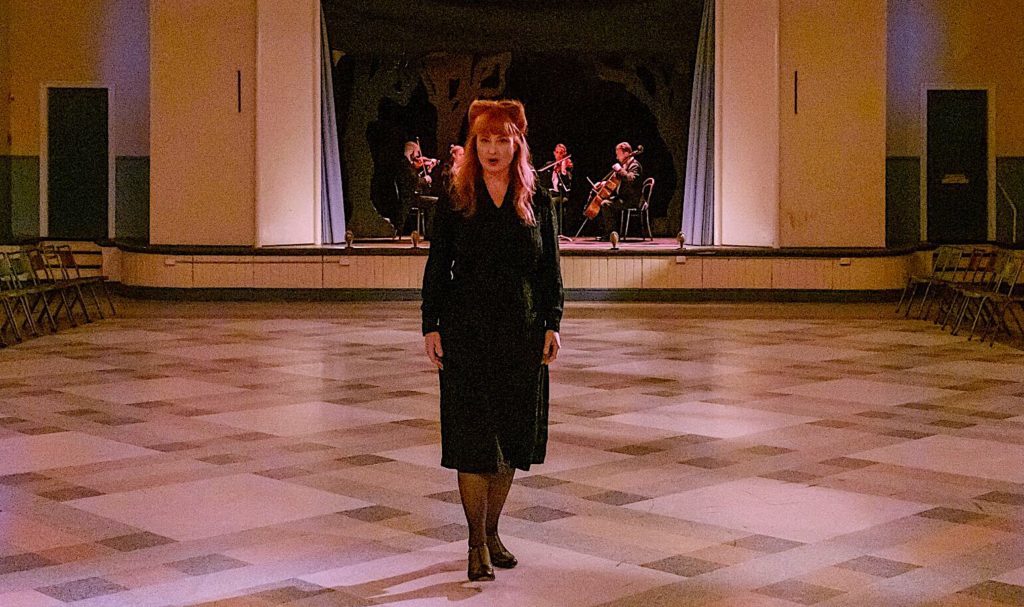 Sunset is staged in what was first a hospice for old men, then a general public hospital, located on the banks of the Swan River in Claremont. Doyle and her collaborators do not refer to any specific elements of this masculine, working-class history. Rather the site serves as a generalised model for a space within which male and female voices and their fragmentary memories echo, both literally and metaphorically.

Doyle is a key figure in what has been identified as British “immersive” theatre, typically staged in non-theatrical venues through which the audience moves, interacting with the space and key elements within it. Sunset is restrained in this sense. The bulk of the action is staged within the fairly conventional space of the institution’s main recreation hall, designed for small-scale theatrical performances, recitals, films, dances and parties. Sunset is akin to all of these. Dease and Doyle make these surrounds sing, dance and murmur.

After a short violin introduction outside, we file past rooms filled with sand, and then immediately on into the hall, with a small stage at one end, and a kitchenette at the other. Once in the hall itself, spectators are seated in chairs roughly located in four main blocks. One by one, seats are relocated to rows parallel to the walls, from which we watch a climatic dance. Before this however, the relatively modest quality of the performance shifts when the dancers re-enter as a large mass which moves amongst and past the centralised seating. At this moment the space seems to suddenly expand. The performance closes with the audience being taken outside to the river bank, looking up at the line of performers above us. This affects another dramatic alteration in our sense of space as we move outside. Dease leads the way as the cast recites a choric lament. The voices of this mixed choir blend with, and fall away into, the sound of the wind and peacefully rustling leaves. The production thus opens and closes with an acoustic punctum, moving us from solo violin to ghostly Aeolian song. 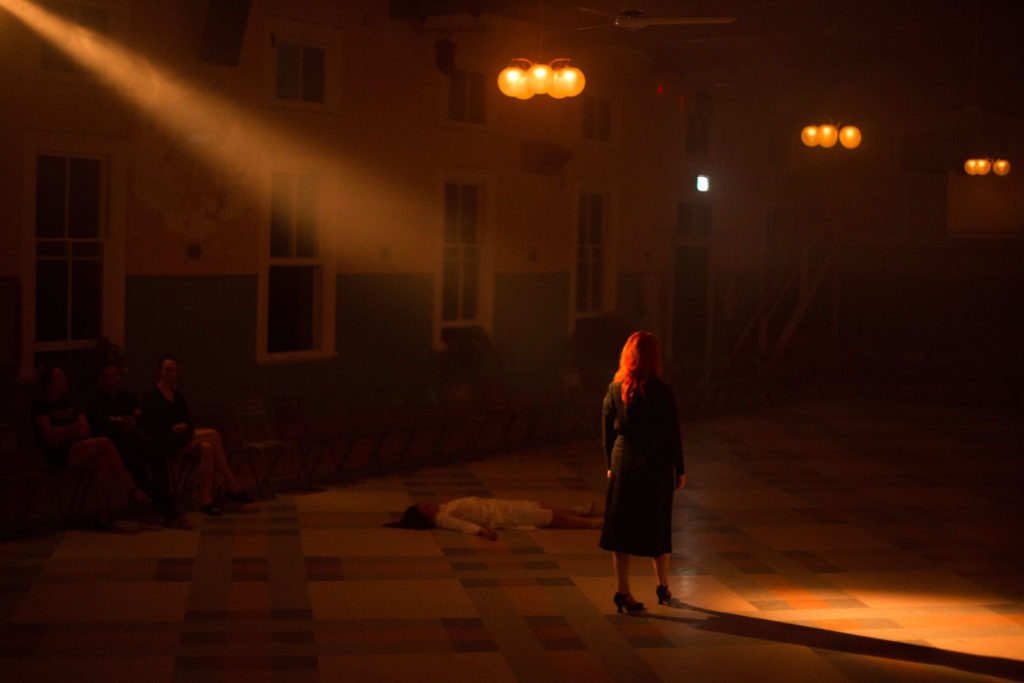 Rachael Dease in the hall | Image by Simon Pynt

The largely non-speaking characters function as types drawn from a range of institutions and social spaces—hospitals, asylums, railways, prisons, streets. There is the flamboyant, camp man in sunglasses (Antonio Rinaldi, who partially channels Klinger from MASH, though more in the spirit of Robert Altman’s carnivalesque film than the lightweight television series), a commandingly tall and compelling woman in black (Sarah Mealor), the crazed, homeless man babbling to himself (Kynan Hughes), the well-dressed moustached waiter or attendant (Timothy Green), the nurse in white (Bernadette Lewis), a quasi queer fantasy figure who is topless and painted gold (Zachary Lopez), an at-times tortured, but also ecstatic, dancing woman with curls (Natalie Allen, modelled on Demeter). Amongst several other individuated figures, there is Dease herself, as a slightly Gothic, almost prophetess-like woman who sings. Only Humphrey Bower, in the hugely sympathetic role of the forgotten poet-immigrant Alfred Ganz, plays a clearly defined role. His function is to comment on the atmosphere and to add short, bittersweet stories about eating sachertorte and other minor pleasures and calamities, all long past.

Sunset does not therefore present a story, and the performance does not feature clearly defined protagonists either. Nor does it unfold in a linear fashion, or indeed according to obvious temporal modes at all. As Ganz explains, what is represented here is the building itself, in the state into which it fell after it “closed its eyes and slept.” Sunset presents a realm in which “time stood still,” where having “tea and cake turned into dinner time.” In Ganz’s words, we join the cast in floating within “an endless ocean” of memories and echoes. It is a production made up of moods, vignettes, combinations, textures, colours, reflected sounds, physical tics and visual elements. It is picaresque and open-ended. Its choreographic pleasures come from intermittently noticing the detailed representation of each figure wandering around us, before we focus on other elements occurring in the venue. The music functions in the same fashion, swimming in and out of consciousness, moving from foregrounded historical recordings (“If I Knew You Were Coming I’d Have Baked a Cake!” for a birthday sequence), to Dease’s live vocals which fade in and out as she turns in different directions. It is a tapestry of sounds, always highly inflected by the very distinct qualities of this large, decrepit building.

At one point, a short Expressionist dumb-show is revealed from behind the curtains at the back of the hall, accompanied by carnivalesque, 1920s whistle motifs and woodblock rhythms. Higher pitched, slightly Arvo Pärt violin motifs mark out the brighter potentials within this unsettled sonic realm. The stage features a simplified cut-out set of a middle European woodland. Ganz retrospectively informs us that this piece deals with that great colonial theme of the (white) girl lost in a threatening wilderness. Ganz then recites a poem which shares his memories of German woods at Christmas time. His words take on a tragic, haunted ambience in this very Antipodean setting. The landscape of his childhood seems far away from this decayed environment.

The sound of an organ moves us out from this sense of reverie, and into a bass soundscape leavened with cymbal bowing and metallic tones (recalling somewhat Györgi Ligetti’s electroacoustic compositions). Here too, sounds tend to come at the listener from far away, rising and building as they are funnelled through abstract spaces. Dease’s singing contributes to a sense of mourning and ritual. Out of this comes a stripped-back string ensemble, whose tones are blended with so-called “lowercase” recordings in the vein of Set Fire to the Flames or Godspeed You Black Emperor, but with a more urgent, melodramatic character.

Dease’s contribution to this kaleidoscopic effect is itself appropriately varied. The most striking element throughout is this sense of the echo, both in the space, and of memory and history. Taking Ganz’s story and the melancholic ambience of the venue as a cue, much of the score is inflected with an Eastern European Romantic feel. The violin leitmotif which is picked up in the section discussed above is present as soon as we enter the venue, in the form of a looped recording resting within deep, subterranean rumbles. The kitchenette, housing the performers whom the audience meet as we file in, is also sonically highlighted and amplified at the start via samples of the noise of kettles boiling, which enliven a dispersed bed of string sounds and bass. Room sounds themselves, echoes of barely heard conversations, and footsteps, also intrude, before a series of recordings of jazzy 1930s foxtrots come into play (“I Guess I’ll Have to Change My Plan”and “Let’s Misbehave,”amongst others). The use of music to evoke the past is also employed in the live performance, with Ganz haltingly singing snatches of “Silent Night / Stille Nacht,” while later a German opera soloist sings from out from within a dense, reverberating soundscape. This structure recalls Dennis Potter’s landmark Singing Detective television series (1986), revisiting Potter’s use of sometimes dark, sometimes amusing, musical revues as semi-autonomous sequences. The antique recordings are initially brought to a halt by the sound of a violent storm, serving to close us off from the outside world. Never far away within all the soundscape is a spiralling, clockwork leitmotif suggestive of an indoors realm where that which has happened before is endlessly replayed by spectral windup figures or fractured music-boxes reverberating throughout the space. 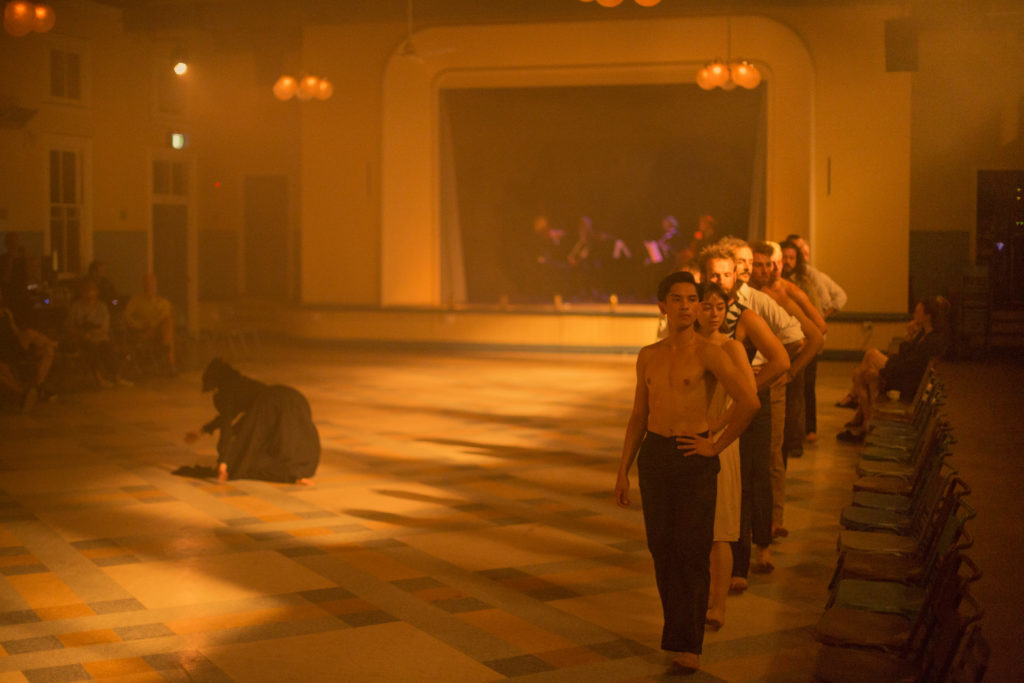 Overall, Dease tends to swap from the lyrical, to the rhythmic, and then to static beds of noise, in order to set sequences apart. A dirge-like militaristic drumming section overtakes the space after the midpoint, the sound being akin to both a percussion band and a train. The moment when audience members are moved from our chairs is by contrast accompanied by sharp, staccato string plucks, which take us into a climactic moment where the full cast is assembled, to all dance together in the hall, just as their characters did long ago. 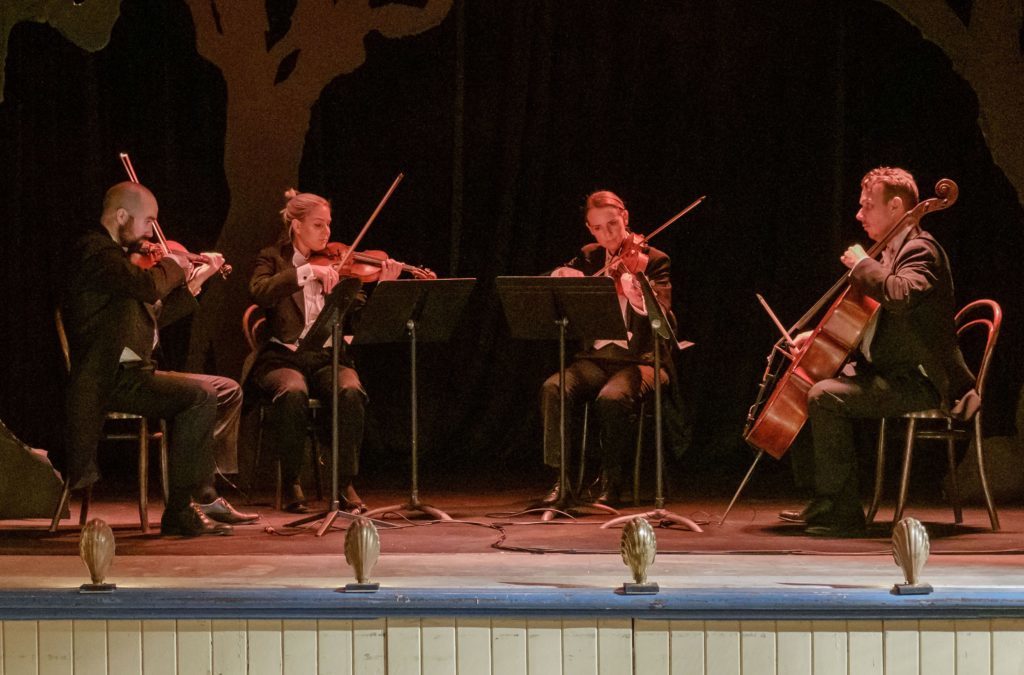 This is arguably the point where the music itself becomes most explicitly a dramatic device in its own right. The small stage at the back is opened to reveal a now live quartet (Brian Kruger, Rachael Aquilina, Kathy Potter, and Tristen Parr) playing an achingly neo-Romantic composition, which breaks out into a harshly plucked dance somewhat reminiscent of the tarantella—though the rhythmic pulsation of the larger score is retained by shifting the time signature into that of 4/4 or a reel. With women and men dancing in this now decommissioned institutional building, the feel of this sequence is close to choreographer Anne Teresa de Keersmaeker’s famous Rosas Danst Rosas(1983), even if the music recalls Michael Nyman’s stately, rhythmic, neo-Baroque compositions, more than Thierry de Mey’s very different score for Rosas.

As a production based on free-floating sensorial motifs, Ganz’s line about how the “music” of his childhood “went right through my body” provides a good summation of what it is like to attend Sunset. It is above all a variable, sensory experience, in the sense of Allan Kaprow’s more scripted “happenings,” a shifting, drifting realm of sound, colour and movement, set amidst flaking, painted walls.

Rachael Dease’s involvement was made possible through the support of Tura New Music and the Sound Connections philanthropic campaign.

Dr Jonathan W. Marshall has published arts criticism in Perth, Melbourne & New Zealand for over 20 years; he is the coordinator of postgraduate studies at the Western Australian Academy of Performing Arts, Edith Cowan University.