Tura and the Western Australian Academy of Performing Arts at Edith Cowan University have joined forces to bring Trautonium player Peter Pichler to Perth from Munich for a series of workshops and events. For the first time in its 90-year history Peter will being the Trautonium through Australia in April 2019.

The Trautonium, invented in Berlin, Germany, in 1929, is the great-grandfather of the synthesizer. The eerie sound it produces has featured in films, most notably used for the bird sounds in Hitchcock’s thriller The Birds (1963).

Bringing his Trautonium to Australia for the first time, Peter Pichler is the only touring artist performing live on the Trautonium. Playing modern electronic music on this forefather of the synthesizer, Peter will present concerts, workshops and lectures in Perth as part of a week-long residency at the Western Australian Academy of Performing Arts at Edith Cowan University.

Peter will work with undergraduate and post-graduate composition and performance students exploring the possibilities of this rare historical instrument.

As part of this residency, Peter will present a concert of works for Trautonium in collaboration with music students from WAAPA. Rare performances of Hindermith’s Concerto for Trautonium and Orchester (1931) alongside Harald Genzmer’ Bass Solo in F (1938) will be performed in collaboration with string players from WAAPA’s String Camerata under the leadership of Paul Wright.

The concert will also feature a live soundtrack performance to the documentary film A Voyage to the Moon by Manfred Durniok which was originally scored by Trautonium pioneer Oskar Sala. A Voyage to the Moon describes the journey to the moon from the start of the rocket over various experiments and difficulties in absence of gravity until the safe return to earth.

Peter will also present a Trautonium workshop at the Perth Artifactory to delve into the back end of this somewhat fragile piece of technology as well as a live soundtrack to Fritz Lang’s Metropolis at the Northbridge Piazza. 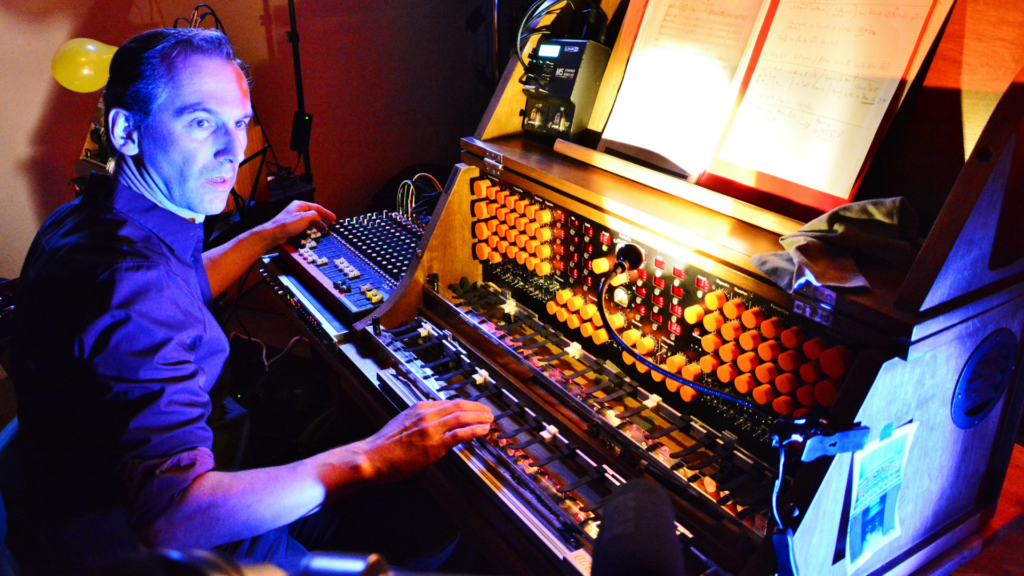 With just about 14 years he discovered music as his personal way to express his feelings and values. He founded the Munich punk band CONDOM which in 1980 lead to his arrest and the ban of the first single due to its ‘unacceptable’ lyrics against the ruling politicians of Bavaria at that time.

His next musical project – the avantgard pop band NO GOODS – toured Europe very successfully in the 1990s.

Peter studied classical guitar and renaissance lute and has been booked as composer, musical director and musician for a multitude of theatre productions. He also develops and performs musical theatre pieces himself, and plays an enormous variety of instruments.

His fascination with the Trautonium started when he was a student and for the last 5 years he has now had the possibilty to perform with this extraordinary instrument and record long forgotten and unpublished works that have been especially composed for it.

He also creates new electronic music and performs it live on the Trautonium.