A week long improvised music and visual art explorative project between visual artist Lena Czerniawska and musicians Emilio Gordoa, Michael McNab and Josten Myburgh. At the conclusion of the project, the quartet will embark on an extensive national tour.

After years of working together in duos and trios around the world, visual artist Lena Czerniawska, vibraphonist Emilio Gordoa, percussionist Michael McNab and electro-acoustic musician Josten Myburgh finally join for their first ever performance tour, amidst Lena and Emilio’s first trip to Australia. Creating music previously described as crystalline, complex and delicate, the group make improvised pieces from sounds at the edge of distortion and feedback, in a space where the electronic emulates the acoustic and vice versa. Lena Czerniawska translates and extends the colours of the ensemble through live drawings both abstract and figurative, sometimes narrating, sometimes subverting, and always searching.

General public are invited to come into the space between 2-3pm on any of the project days to witness the new work being created and discuss with the artists. 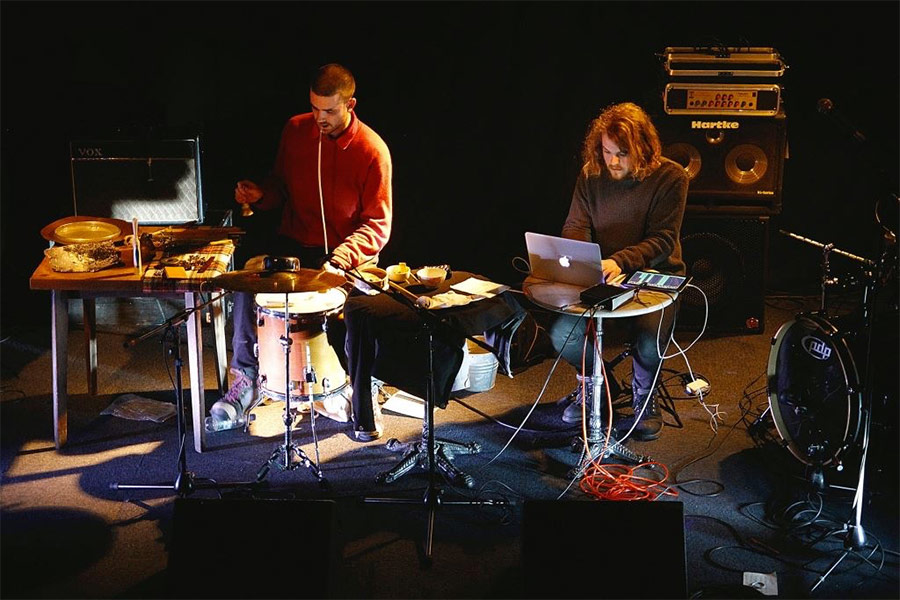 LENA CZERNIAWSKA
I was born in Poland in 1989. For many years I lived in Wrocław where I also finished my master in graphics; I am now based in Berlin. My biggest love and passion is drawing. I work with sketches, murals, exhibitions and installations although what represents my art the strongest is my work with improvised, live drawing.

EMILIO GORDOA
Mexican composer and vibraphonist based in Berlin since 2012. He’s involved in numerous projects including his work as a soloist and in collaboration with theater and dance. Emilio is specially focus in sound art, experimental music, noise, free jazz, improvisation and contemporary music. He is redefining the vibraphone as a source, treating it with preparations and extended techniques, and is a busy composer as well, writing graphic scores for a variety of ensembles, large and small, for theater, documentary films and audiovisual. Studied music composition with Julio Estrada, Vincent Carver and Mario Lavista, and percussion with Raul Tudon.

MICHAEL MCNAB
Michael McNab is a drummer, percussionist and digital sound artist from Melbourne, Victoria, working in the fields of improvisation, performance and studio composition. He completed his Bachelor of Music Performance at the Victorian College of the Arts in 2012, before travelling to Europe to complete a government-funded mentorship under the tutelage of drummers Will Guthrie and Tony Buck in 2013.

Michael was accepted into the 2014 Speak Percussion Emerging Artists Program, where he worked at RMIT’s Spatial Information Architecture Laboratory with other young drummers, percussionists and composers under the mentorship of composer Richard Barrett. The program culminated in performances of new spatialised electro-acoustic works. In 2015 Michael participated in the interdisciplinary art residency Time Place Space Nomad. He has toured Europe numerous times, performing at Festival Cable#8 in Nantes, Serralves festival in Porto, in the Emanuel Vigeland Museum in Oslo, and throughout a number of concert series across Italy, France, The Netherlands, Germany and the Czech Republic. He has also performed at MONA FOMA, with Splinter Orchestra in Sydney, and at the Totally Huge New Music Festival in Perth. His music has been released on Insub Recordings, Cantankerous Recordings, Shame File Music and Ivory Tower Records.

JOSTEN MYBURGH
Josten Myburgh is a musician and organiser based on Whadjuk Noongar country in Boorloo (Perth, Western Australia). His practice involves composition, field recordings, performing, and improvising using electro-acoustic material and woodwinds. He is part of the management of the label Tone List, dedicated to fostering exploratory music in Perth, and curates their annual Audible Edge festival. He also works for Tura New Music on their improvised music and festival programming. Notable performances of his include Fremantle Festival, Supersense, Festival Cable#8, KLEX Festival, Klangraum Festival, Inland, AudioArt Festival, and the Totally Huge New Music Festival. He has been involved with releases on Shame File Music, Edition Wandelweiser, Flaming Pines and Tone List, and been commissioned by artists such as Catherine Ashley, Jameson Feakes and the Western Australian Department of Biodiversity, Conservation and Attractions. He collaborates regularly with musicians and artists in Western Australia, as well as improvisers from abroad including Simon Charles, Lena Czerniawska, Emilio Gordoa, Michael McNab, Matthias Müller and Adam Pultz-Melbye. He is the 2019 recipient of the Dr Harold Schenberg Fellowship (Music).

Mahagonny: Revealing Sonic Places has been made possible through the generous support of: The Department Of Local Government Sport and Cultural Industries, Culture Zone Wrocław and the Instytut Adama Mickiewicza.