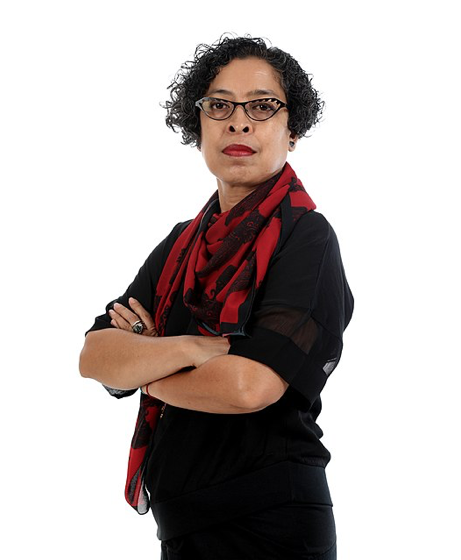 Ubiet was born in Jakarta and was raised in Aceh, North Sumatra.  Her interest in vocal music started when, as a teenager, she joined several popular music groups in Aceh and Jakarta as lead singer. Ubiet moved back to Jakarta in the early 1980s, and attended The Jakarta Institute of the Arts (IKJ) to major in music-voice. As she gradually discovered other possibilities in voice, her focus became drawn to vocal music and its different singing styles and traditions. Ubiet has earned a Master of Music and a Ph.D. degree in ethnomusicology from University of Wisconsin-Madison-U.S.A (1993, 2009), and then lecturing at Graduate School at IKJ.

Despite her academic commitments, Ubiet maintains and nurtures collaborative relationships with several composers, as well as popular and traditional musicians, in a multitude of performances and recordings. She has performed nationally and internationally. Ubiet’s encounters with vocal music with concentration on voice embellishment are what led her to meet composer Tony Prabowo with whom and another five traditional Minang musicians she established a “new music” group, The New Jakarta Ensemble—they released a CD entitled Commonality(Siam Record, New York, 1999). She has also released a CD of an alternative popular music Archipelagongs(Warner Music Indonesia, 1999), a CD of new music Music for Solo Performer: Ubiet Sings Tony Prabowo(Musikita, Jakarta, 2006), a CD of a new interpretation of kroncong music, Ubiet & Kroncong Tenggara(demajors, Jakarta, 2007/2013), and also a CD, duo with Dian HP, songs based on poems of two prominent Indonesian poets, entitled Komposisi Delapan Cinta (demajors, Jakarta, 2011).  Her other projects are Duo Ubiet & Dian HP: Dedendangan, the duo takes Melayu music as their source of inspiration, and a collaboration with jazz guitarist-composer Tohpati (Duo Ubiet & Tohpati): a contemporary interpretation of Ismail Marzuki’s songs, one of Indonesian leading composer in the 1940-50s. One of her latest project, a collaboration with cellist Dimawan Krisnowo Adji, interpreting Eastern Indonesia songs. Her collaboration with prominent Indonesian choreographer, Eko Supriyanto, which based on West Halmahera songs of Eastern Indonesia, resulting music for Eko’s choreography Balabala.