The Fitzroy Valley New Music Project in Fitzroy Valley, Western Kimberley, has been running since 2017 and is directed by renowned music educator/composer/performer Gillian Howell. Peter will work with students, community groups, and individuals in Fitzroy Valley for an instrument-making process.

A series of residencies have built and are building collaborative foundations and relationships developing music projects through the exchange of ideas: mapping interests; exploring possibilities; assessing skills and developing creative languages for shared art-making. Participants are learning to explore music-making together and are devising and performing their own music composition. Outcomes include new works (songs and instrumental composition) to be presented to local audiences, recorded for distribution, instrument making, and a student art workshop program.

Keep up to date with the latest blog posts 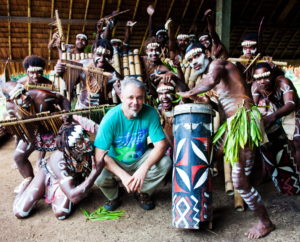 In 2000 he was awarded the Australia Council CCD Fellowship in recognition for his community arts practice, resulting in a film documentary and CD recording, based on his collaborations with musicians whilst living in Romania, Bolivia, Solomon Islands, and Malawi.

He has directed and produced major projects and festivals throughout Australia and overseas, including Fremantle Street Arts Festival, The Big Five O (Christmas Island), Denmark Festival of Voice 2008 & 2010, multi-media theatre pieces Rhythms of Life and Greens Pool The Musical, and the Brave New Works Festival 2017, ‘18 and ’19.