The Fitzroy Valley New Music Project in Fitzroy Valley, Western Kimberley, has been running since 2017 and is directed by renowned music educator/composer/performer Gillian Howell. Cecile will collaborate with Fitzroy Valley District High School to develop a student art workshop program and align this program with the instrument making and musical work carried out by twin residency by Peter Keelan.

A series of residencies have built and are building collaborative foundations and relationships developing music projects through the exchange of ideas: mapping interests; exploring possibilities; assessing skills and developing creative languages for shared art-making. Participants are learning to explore music-making together and are devising and performing their own music composition. Outcomes include new works (songs and instrumental composition) to be presented to local audiences, recorded for distribution, instrument making, and a student art workshop program.

Keep up to date with the latest blog posts 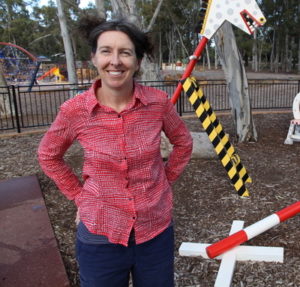 Cecile’s work spans a wide spectrum of the visual arts, from fine art, to theatre design, environmental, and community arts.

Her enthusiasm for using recycled and found materials has always been an intrinsic force at the very heart of her arts practice.

This interest in repurposing consumer waste linked her up with artists, musicians, performers, and filmmakers working within this area, leading to collaborations on many sound art and theatre projects. She has also toured regionally as a community artist giving workshops in multiple art forms specific to the region’s own interests and needs.

Working as an artist for Ghostnets Australia in remote coastal areas became the starting point for her last solo show “Trapped”. The discarded fishing nets and marine debris collected during her residency were intertwined alongside marine debris found on her own local beach in the south coast of WA. This gave her a personnel connection to place and an awareness of the global waste carried throughout our oceans today.

Marine debris and the objects and unusual materials that she finds are a constant source of inspiration as are the places they are found. Collecting plays an important role in her process of art-making. The stories and concerns that are ignited by these found objects and fragments are creative possibilities as well as a responsibility. A confirmation of experience and trigger of memory are expressed in her artworks.

Her exhibitions have been complimented with residencies in Switzerland, Vietnam & Fiji. Exhibiting both locally, interstate, and overseas has led to her artworks being acquired from the Western Australian Art Gallery, Edith Cowen University, and numerous private collections such as Kerry Stokes and Janet Holmes à Court.

Cecile continues to move between all her varied art interests with a keen sense of exploration and enthusiasm, keeping the ‘surprise factor’ alive within all her work.

It is this element of self-challenge which has inspired her unique and original place in the Australian arts landscape.