Performing in Perth for the first time since the end of 2019.
Decibel New Music Ensemble, like many other ensembles and art organisations, had its activity for 2020 cancelled. 2 Minutes from Home is what they did instead – commissioning two-minute works from artists they have worked with in the past – one work per fortnight from July to December 2020.

Each work was presented as a video released on social media, showing the ensembles playing their parts in their homes, alongside the score.  Listeners can follow the music as the musicians play it, and enjoy the wide range of notational approaches the range of composers bring.

In 2022, Decibel is performing these new works live in a single world premiere program, with the score videos as film. Be prepared for a wide range of musical styles, performance approaches, and snippets of interviews from the artists between tracks.

Part cinema, part experimental music extravaganza, Decibel performs 20 two-minute works composed in the year 2020. The big twist? Each work is written in a radically different visual language for Decibel to decipher. Follow along in real time with stunning projections of the animated musical scores, as the ensemble transforms colours, shapes, lines and objects into music. There’s Aaron Wyatt’s Glisten that turns jewellery box treasures into an equally shimmering soundscape; Thembi Soddell’s Let Go of Control which sounds and looks like a gritty adventure into the unknown; Marina Rosenfeld’s self-referential and resolutely non-conformist A martial exercise in togetherness; J.G. Thirwell’s Angel of Retribution in which a minefield of colourful shapes and symbols explodes across the senses; and so much more. Open your ears, your eyes and your mind, in a concert like no other by acclaimed genre-disruptors Decibel.

“art that demands your full attention for two minutes of full sensory immersion, where sounds, visuals and ideas are intricately woven together” Harriet Cunningham, The Saturday Paper, 2020 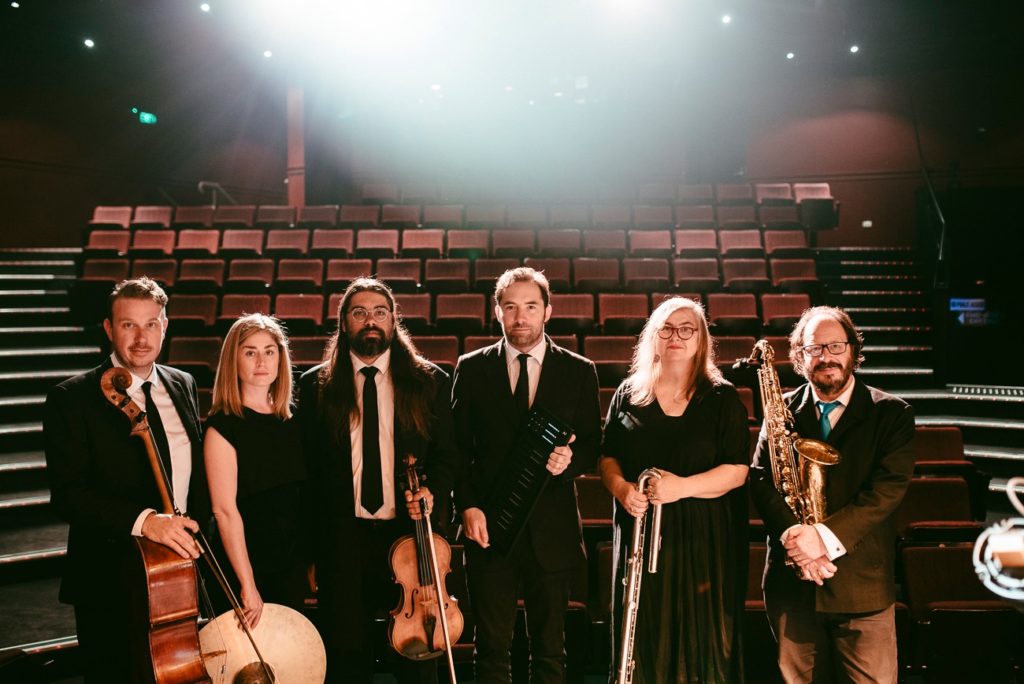 Decibel
Based in Western Australia, Decibel are world leaders in the integration of acoustic instruments and electronics, the interpretation of graphic notations and pioneering digital score formats for composition and performance.

Decibel have commissioned over 60 new works since their foundation in 2009, have toured Europe and Australia, recorded for ABC Classic FM and SWR German Radio, and released five albums to date on Australian and international labels. The ensemble has developed and commercialised the Decibel ScorePlayer iPad app, a score reading device incorporating mobile score formats and networked coordination performance environments that is sold worldwide.

Decibel’s 10 at 10 concert series has been made possible through the generous support of the Department of LocalGovernment, Sport and Cultural Industries and Monash University.