This blog post is by Peter Keelan and Cecile Williams – Tura’s current Artist’s in Residence in Fitzroy Crossing, Kimberley, WA. This is part of an ongoing project, the Fitzroy Valley New Music Project, supported by Healthway, promoting the Act-Belong-Commit message, and the Rowley Foundation.

The first week of instrument-making and learning to play the made instruments, combined seamlessly with creating designs and painting many of the instruments. All this here at Fitzroy Valley District High School with special thanks to Jane Barker.

With daily temperatures of forty degrees plus, the students showed great focus and exuberant energy to saw, drill, sand, and hammer together the starting cache of instruments. In concurrent design workshops led by artist Cecile Williams, and wonderfully supported by art teacher Michelle Siciliano, a series of visual arts design, construction, and painting pieces have started to take shape.

Students have learnt how to use electronic tuners and phone tuner apps to gauge the notes they were making by cutting lengths of PVC tube which were then struck with rubber thongs. One student asked if the drum sticks they had made could also be made into flutes, so we tried some experiments and successfully made his drum stick flute. Students also carved thong-o-phone beaters, made drum sticks and guiros using serrated tube and hair combs, and made water cooler drums. Handheld thong-o-phone tubes were cut and ready for the next phase (next week), two slide tuneable didgeridoos and two huge 44-gallon bass drums were made and the creation of some bass thong-o-phones commenced. Along the way we encouraged a spirit of experimentation, to have fun and explore ideas, and some ‘wacky’ instrument concepts were explored.

Cecile commenced each day by presenting some films of her arts practice and chatting with students about her process and work history. This was followed up by working with students to draw, do blind drawing exercises, and describe what they love doing by, in, and around the Fitzroy River. Drawings were then scaled up to create the design for two large props, using bamboo frames, to become part of the final presentation to the school and community.

Mid-week, Cecile was lucky to be invited to attend a remote women’s art camp at Ngumpan, an hour’s drive from Fitzroy Crossing, meeting other artists, art centre managers, and connecting with Mia Donnet-Jones of the Marnin Women’s Centre printing program.

We are compressing a huge amount into two and a half weeks but it’s wonderful that it’s part of Tura’s ongoing Fitzroy Valley New Music Project under the direction of Gillian Howell.

There is something deep resonating from within the vast Fitzroy River, which we drive over each morning en-route to the school. Water, life, birds, health, crocodiles, and lizards. Hence the composition the students are working on is inspired by their relationship with that river, from the peace and tranquility of early morning stillness, through the blazing midday heat, and into that balmy haze and sweet-smelling evening. Winter. Summer. The build-up season. The wet. The river is a trove of inspiration. 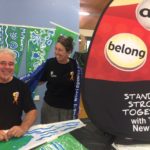 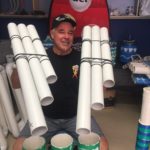 Peter Keelan with the PVC instruments 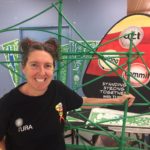 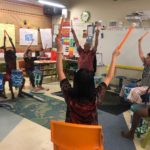 Learning to play the made instruments 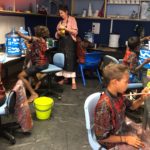 Painting the instruments with Cecile Williams 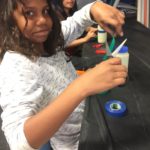 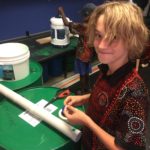 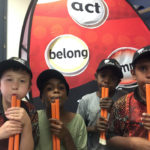 Playing the made instruments 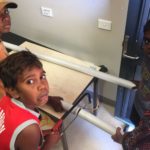