The Beginning of The Wreck

Thirty minutes after wandering the neon lit, synthetic aisles of a supermarket in a Broome mall I found myself following Tura’s Regional Residency artist Jon Rose through the scrub off the Corrugation ( Cape Leveque) Road to discover the first car wreck on our journey north up the Dampier Peninsula. Sitting high above the road this first wreck looked like a sentinel observing the seemingly odd flow of caravans and 4WDs exploding the pindan as they powered north or returned back south. Its rusted, corroded body exposed its naked core slowly disintegrating into the stunning red earth which its rusty colour reflected in uncanny fashion. Stripped of its outer clothing and pretension of glamour and modernity, this wreck, bent and buckled from whatever happenstance brought it to this place, created powerful images produced by chance, reflecting impermanence in this most ancient landscape.

Rose knew where to find the idiosyncratic sounds of this wreck as though it’s a common instrument though delighted when he found something never previously heard or recorded. It was uncanny to hear the variety of sounds and the power with which they reverberated through the wreck and dissipated across the outback, as though it was part of their original design – from highway transport to outback sonic emanator.

We repeated this wreck search all the way to Cape Leveque often with the cry of ” stop theres another one ” requiring some fairly risky u turns, but producing a wealth of photographic documentation to be used in future installation as well as marking the best and nearest ones to return to with film crew to perform on and record the individual sounds.

The Dampier Peninsula had cast its spell on this project as it awaited what the communities of  Lombadina and Djarindjin would reveal through their stories of cars, wrecks and histories.

Read about the project 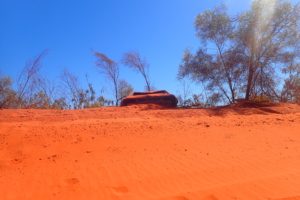 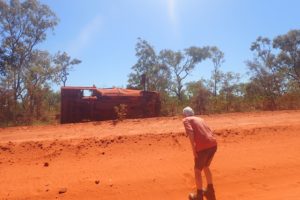 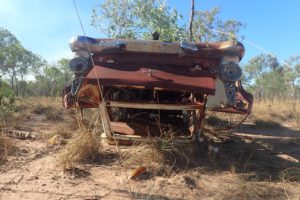 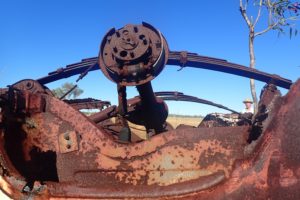 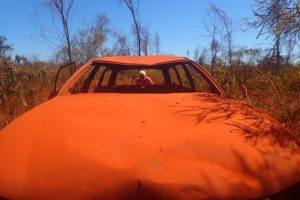