At One Arm Point school we worked with a specially-chosen group of 10 young participants – the teachers nominated people they thought would benefit from taking part in the project (or invited students to nominate themselves), and so we had a group of participants whose ages ranged from 7 to 14.

As at Djarindjin-Lombadina, the focus was on creating original music, and we started work on these originals right from the first day. However, we also knew that we wanted to work with every child in the school in some way, so we decided to involve them in a body-percussion dance, that could be performed as part of the Drum Groove we’d composed with the core group of participants. The core group of children invented some steps and moves and helped us sequence these into an 8-beat routine, then went with Tony and I to each of the classes in turn to teach them the dance, in preparation for Wednesday’s concert. 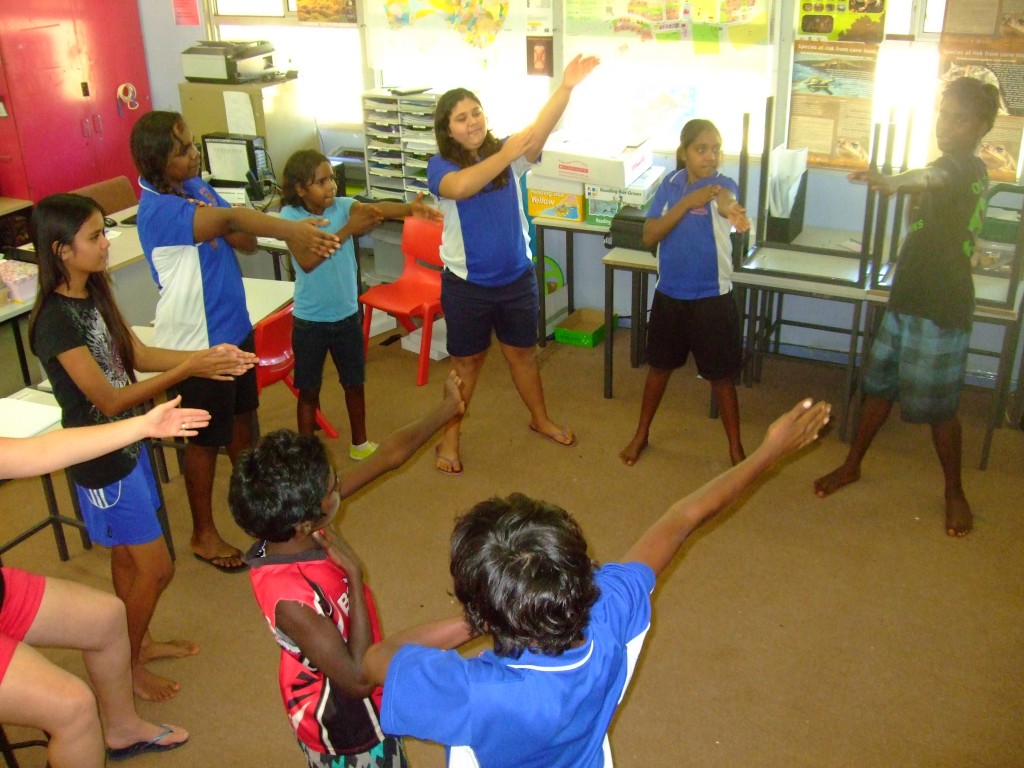 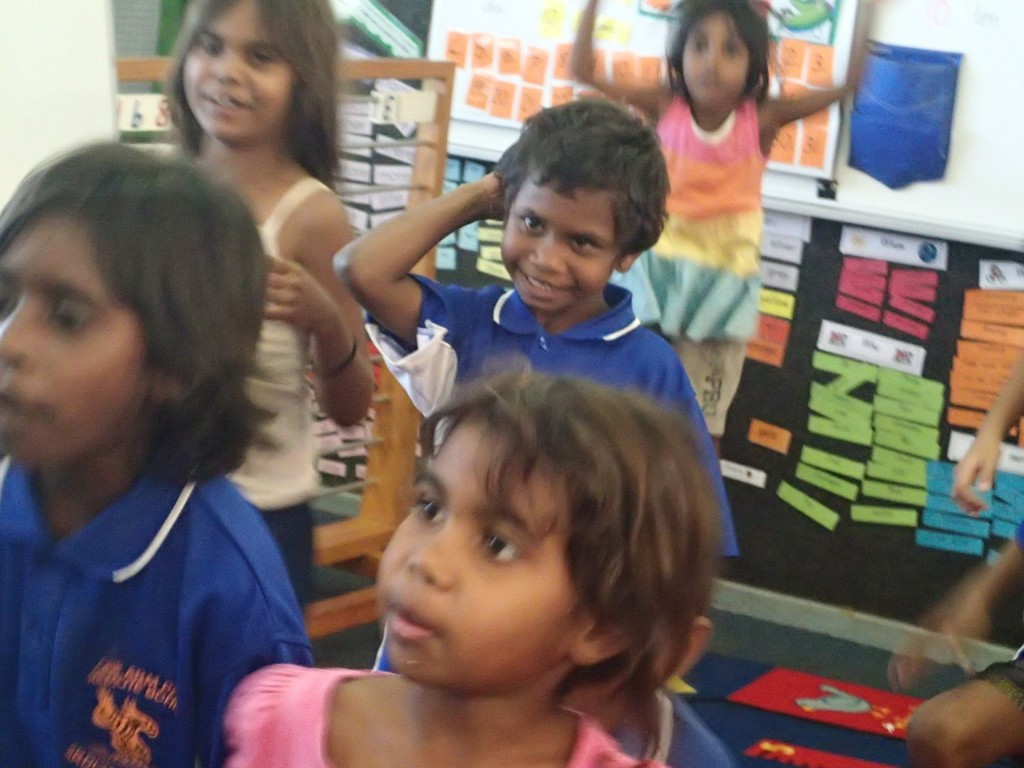 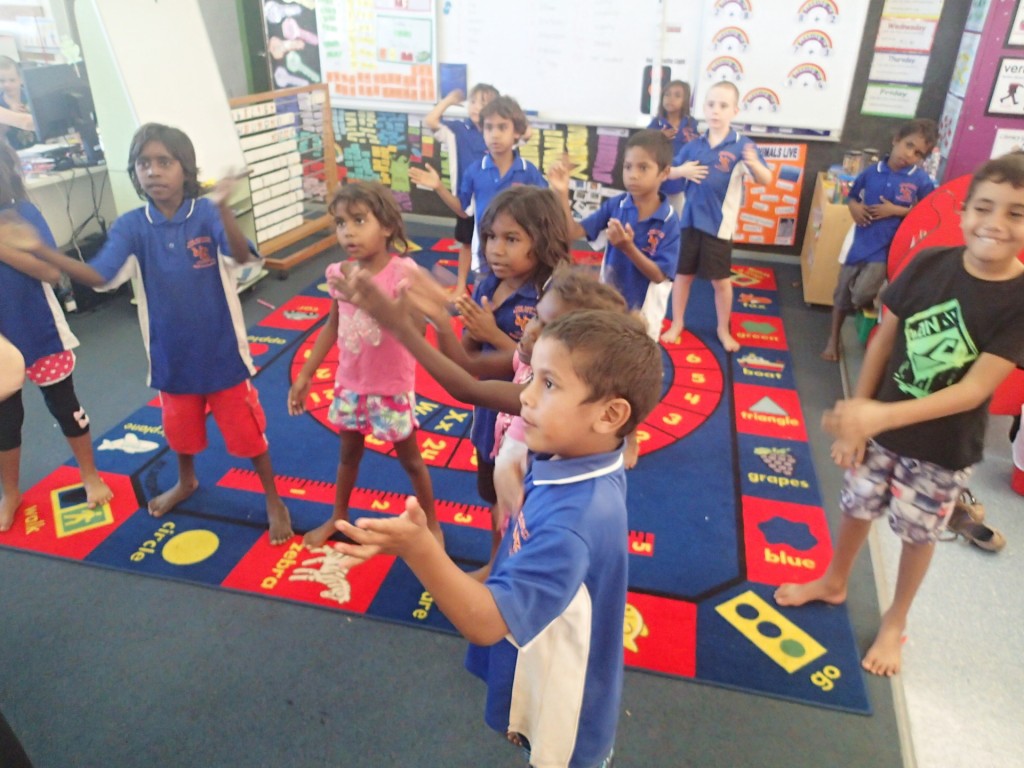 By the end of Tuesday afternoon we had created a song about culture and country (with recorder interlude in the middle of it), a funky Drum Groove, and a song in 3-part harmony. 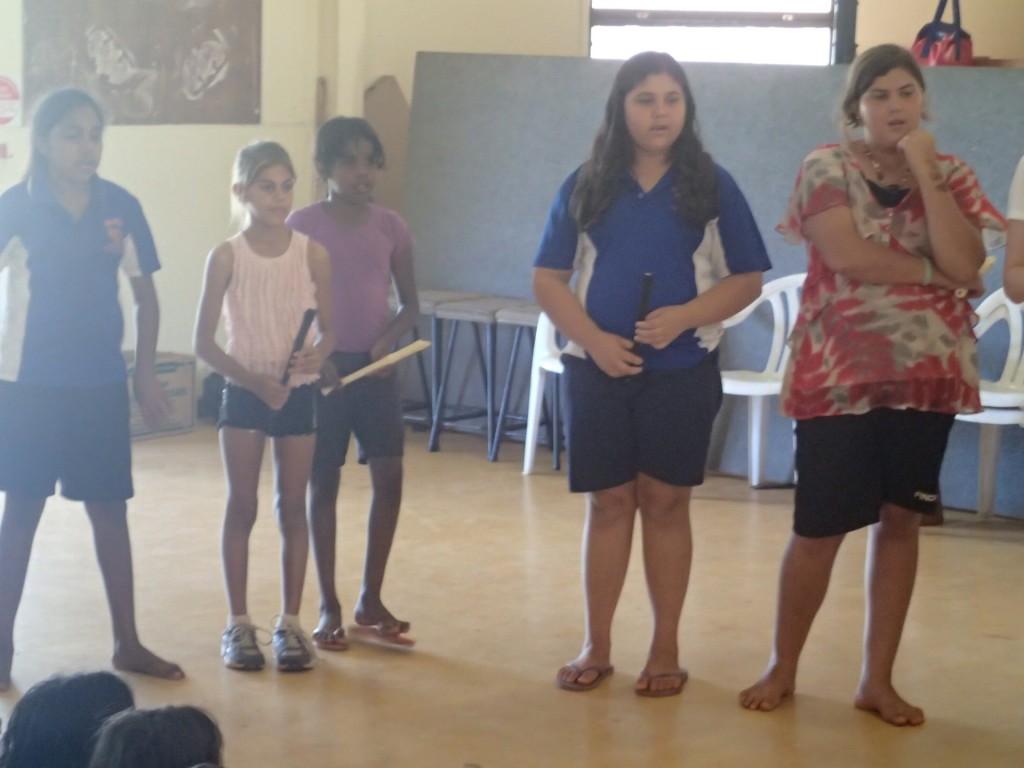 We spent the last session of Tuesday making posters for the concert to put up in the local community shop and office. 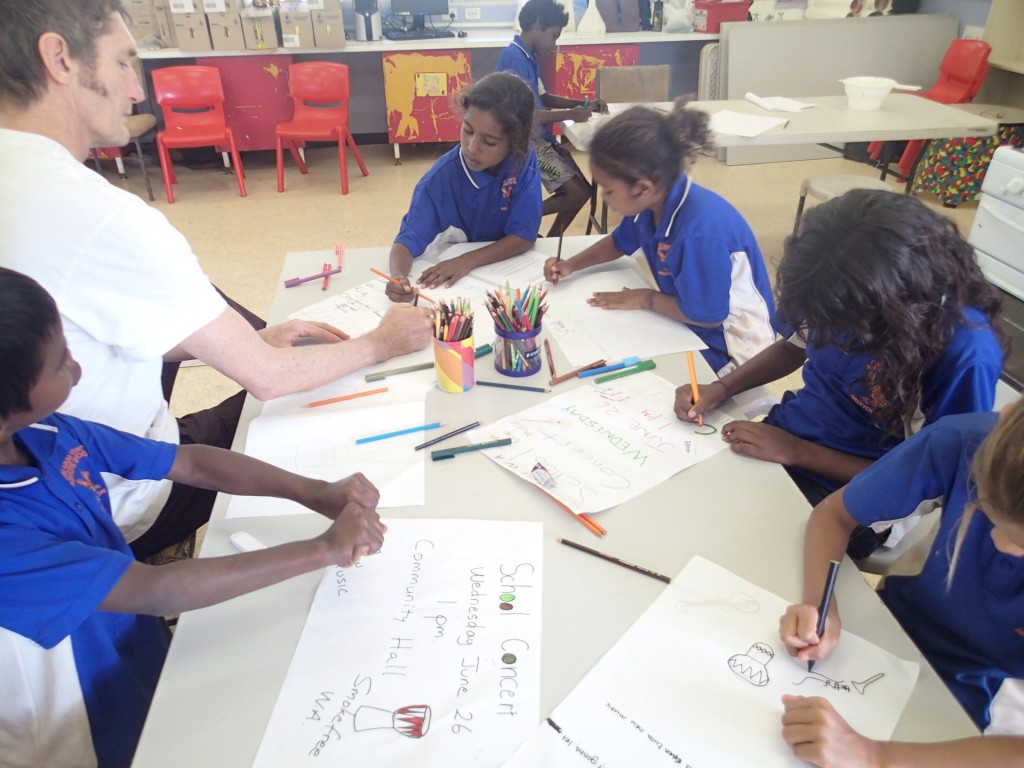 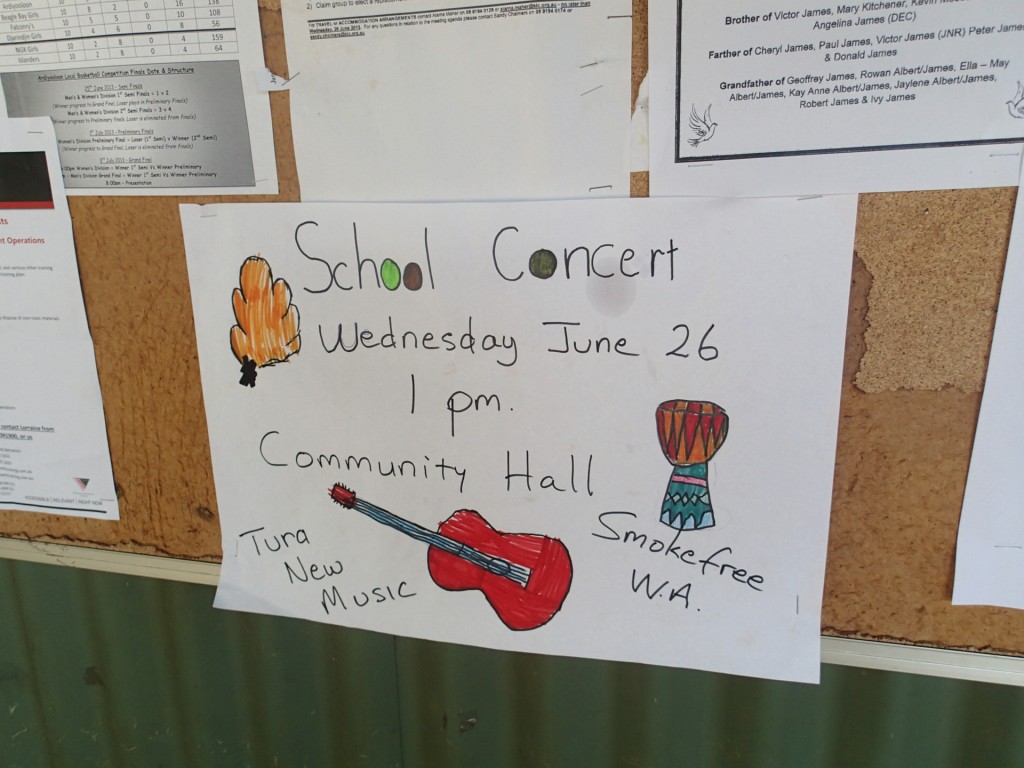 At the concert on the Wednesday, everyone joined in with the body percussion dance – even the teachers, and some of the audience members, who just learned it on the spot! 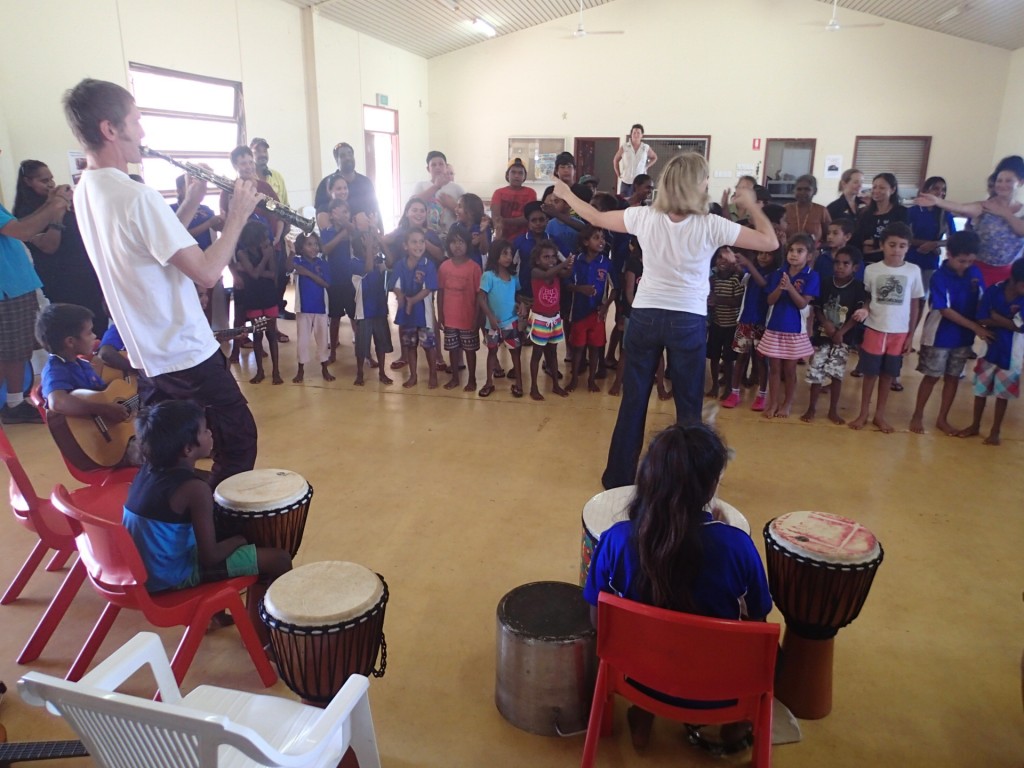 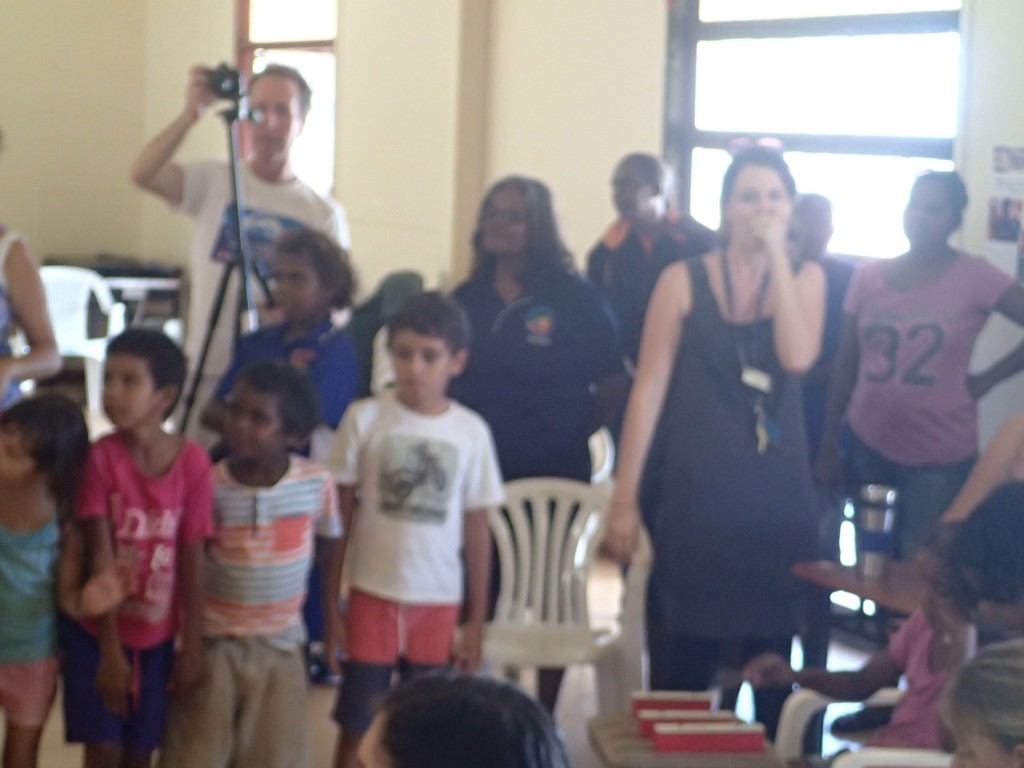 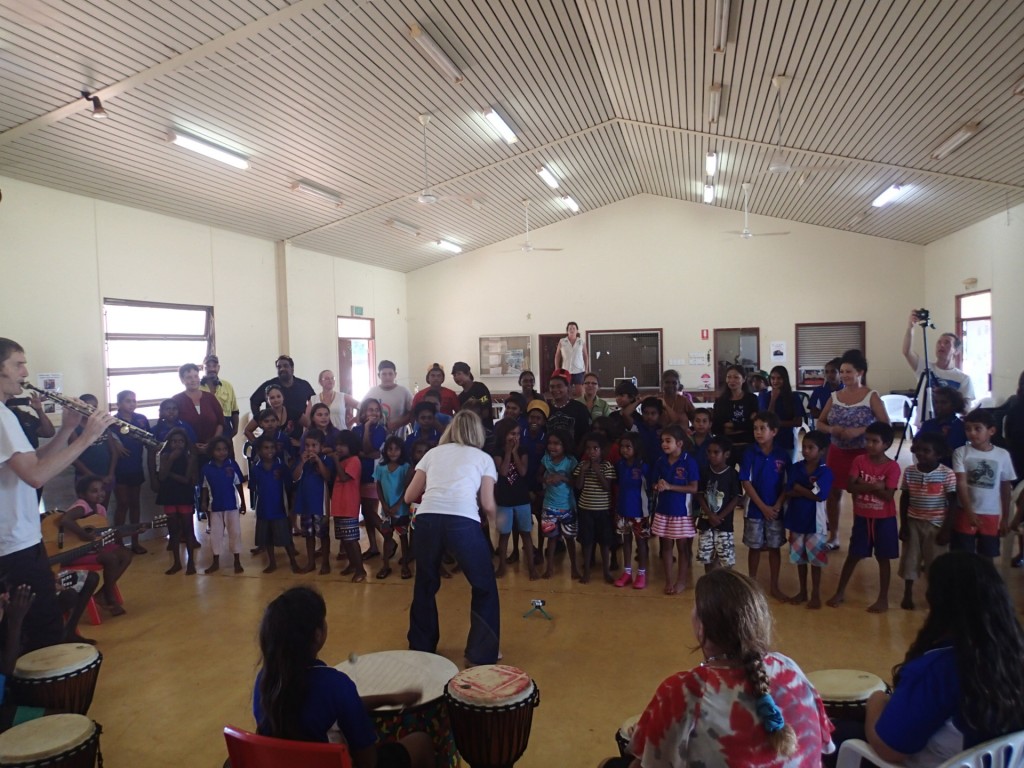 We felt so proud of the students – it was a lot of musical material to invent in just three days! They looked like they felt proud of themselves too. And there is no doubt that others – their friends, teachers, parents, and other community elders – were impressed by their achievement and the musicianship shown in the concert. It was sad to say good-bye, but the plan is to bring us back in 2014 – which means it is not good-bye for long, only until we meet again and get to make some more music together. I for one can’t wait! It’s been an amazing few weeks. Thanks Tura!

As ever, thanks to the sponsors of Tura New Music’s Remote Residency – Healthway Smoke Free WA, and Horizon Power.

Our work is fast-paced and focused! Today, in our second day with the core group at One Arm Point Remote Community School, we created a short body-percussion dance, developed a drum groove with the instrumental sections, wrote the first half of a song that builds on musical material we developed with the small group on Friday, and led short workshops with all the other classes in the school, ably assisted by our group of young musicians.

Highlights of the day:

Yesterday was our first day at One Arm Point Remote Community School. We met 7 of the children who are going to be our main music composers for the Tura New Music Remote Residency project here. Everyone arrived at 8am. It’s natural for people to feel a bit shy coming into a workshop for the first time, wondering if they will like it, who else will be there, and what they will be asked to do, so we started with names and ice-breaker games, getting everyone relaxed, spontaneous and playful.

Early on, we learned that everyone was keen to play djembes, so we walked over to the storeroom in another building to collect one each and bring them back to our workshop space. We played rhythms around the circle, noting the inventive approaches that students demonstrated, such as incorporating hand-claps into their patterns.

It’s important to get some of the foundations of rhythm established early on, so we spent a bit of time working with regular cycles of beats, using numbers and subdivisions to focus everyone’s attention and to build unison patterns. This generated a cool rhythm that ended with the word “No!” on the 4th beat of each cycle.

Next we introduced some of the instruments we’d brought with us to share – chime bars (adding to two sets they already have in the school), and wah-wah tubes. People took turns to play these, and we built up another rhythmic pattern, this one anchored with a simple melody on the chime bars and accompanied by guitars. I am pretty sure that this music will end up being in our final concert – it all came together very quickly and smoothly.

Our main task was to decide what kind of themes we wanted to explore in our group compositions. To do this, I asked everyone to create a “map of the heart”. This is a drawing task in which each person draws a detailed ‘map’ (it can be in a heart-shape, or any shape they choose) that depicts all of the things that are most important to them in their life. The most important things take up the most space in the heart-map.

It’s a task that requires gentle facilitation and patience, because often, people aren’t sure how to start drawing their map. But with Tony and I offering questions and suggestions as prompts (“What do you love to do most?”; “Who do you like spending time with?”; “Is there anyone you miss, or think about a lot?”), the maps started to emerge.

I never make anyone share their map with others, or talk about the detail they have included if they don’t want to. Maps of the heart are personal, I reassure the students, and you can choose who you want to share them with. I want them to feel safe to include whatever they want in their maps. I encourage them to draw and use symbols, as well as words. Metaphor can be a powerful way to express something that is important to you that you don’t want to put into words.

As the maps reached completion, common themes across the group were revealed. I wrote some of the main themes on the whiteboard. We then voted for our favourite ideas. People could vote more than once – why not? The aim was to find the main points of resonance for the group, and then build our compositions on these.

What this process revealed was two broad themes – Future Dreams, and Culture, Language, & Country – into which all of the main Map Themes could be incorporated. If you look at the red and green arrows in the image below, you can see how this started to happen.

Our morning workshop included one further creative task. The tubs of instruments brought over to the workshop space by the teacher in charge included several recorders – a treble and 4 descants. We also had a set of 4 guitars. In the last part of the workshop, we divided into 2 groups – a guitar-learning group and a recorder-learning group. Tony took the guitarists outside to learn a couple of good ‘beginner’ chords (we like E minor), while I stayed inside to give a beginner recorder lesson. The students chose which instrument they wanted to play.

We spent about 40 minutes developing some initial skills and knowledge in the group, then got together to see what we had. And what do you know? The descant recorder notes fitted well with the first of the guitar chords, and the treble recorder notes (a fifth below, using the same fingerings) worked beautifully with the second of the guitar chords. So we jammed together awhile, getting used to the pattern of playing four repetitions, then stopping for four while the other group played, then playing again for four, then stopping for four. And so on.

Again, we have the foundations of a group composition here already.

It was a very productive and organically-flowing morning workshop. We talked to the students about the goal of presenting our music in a community concert on Wednesday afternoon. “But Gillian, what will happen if we’re not ready by Wednesday?” asked one of the younger girls as she left. “We’ll be ready,” I reassured her. “It seems a lot – and it is – but we’ll be ready. Don’t worry about that!”

The 2013 Tura New Music Remote Residency program will be at One Arm Point Remote Community School until Wednesday 26 June, thanks to sponsorship from Healthway SmokeFree WA, and Horizon Power.