This article, blog post two, is written by Gillian Howell – Tura’s current Musician in Residence in Fitzroy Crossing, Kimberley, WA. This is part of a three year program supported by Healthway, promoting the Act-Belong-Commit message, and The Ian Potter Foundation.

I had several creative projects running in tandem this week. Monday morning kicked off with the Senior class: one very skilled guitarist, a beginner guitarist and a beginner bassist (and me on clarinet). The previous week I’d shared Steve Reich’s ‘Electric Counterpoint’ with the main guitarist and on Monday we decided to create an original piece made up of layers of melodic fragments, following (roughly) the chord structure in Reich’s 3rd movement. It was an intensive 3 hours of careful listening, mimicking, and then evolving our own ideas and exploring ways of layering them.

Next I worked with the two Year 4-5-6 classes (about 23 students in all). We spent an hour and forty minutes composing a song about Jandamarra, leader of the Bunuba people’s resistance against the invading pastoralists in the late 1890s. I’d imagined we might only write 2 verses and a chorus (partly because the students are investigating the Jandamarra story across the whole of this term, and I thought the song we wrote together might accrue additional verses over the course of the term). However, we completed five verses and a chorus! The creative forces are strong in this group.

The Jandamarra project was my main focus this week. I worked with one class to develop an energetic and rhythmic drum piece to represent an ambush and shoot-out at Windjana Gorge, and with the second class to create a very atmospheric instrumental soundscape of Jandamarra’s retreat into a secret cave, where his ancestors “sang away his pain”, healed his wounds, and bestowed magical powers upon him, so that he could “appear and disappear like a ghost” and “fly like a bird”.

I also continued working with each of the classes in the primary school, working alongside the school’s Performing Arts teacher. On Tuesday I worked with the children in the Special Needs group, and we explored the different ways we could create melodies by dividing the chime bars and wah-wah tubes among everyone in the group.

Another concurrent project/relationship in development this residency was with the Baya Gawiy Early Learning Centre (part of Marninwarntikura Women’s Resource Centre). I’d spent several mornings last week hanging out with the oldest group (known as Jambila, or baby barramundi group), observing their creative play and interactions with environment and with each other, and participating in music sessions led by a local musician and one of their teachers. Through these observations I developed an idea for what I call a ‘journey’ project, where the children go on a journey through the music, but also enact the journey with their bodies and through using different parts of the available space (e.g. indoors, outdoors, sand, trees, shade, etc).  On Wednesday morning I took the group on a ‘camping journey’. I’d composed some simple call-and-response songs for us to sing together—complete with actions—and a number of ‘events’ (such as creeping past a sleeping snake and jumping one by one over a sleeping crocodile) to help create the feeling of an exciting and adventurous journey. We also played instruments (frog guiros and wah-wah-tubes), ‘slept’ on a mat under the stars, and got chased by a crocodile as we walked back ‘home’. 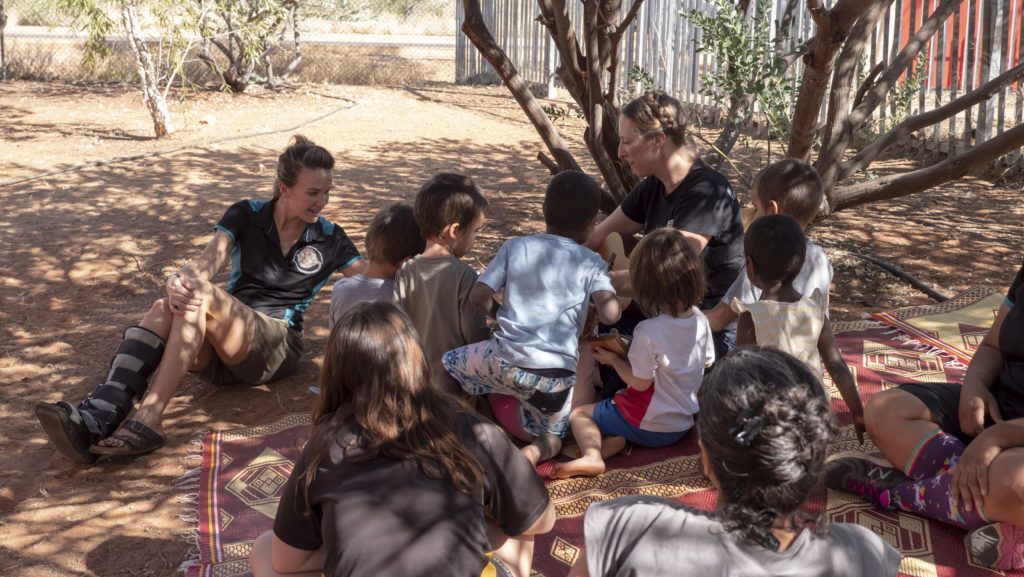 Gillian Howell with the Jambila group 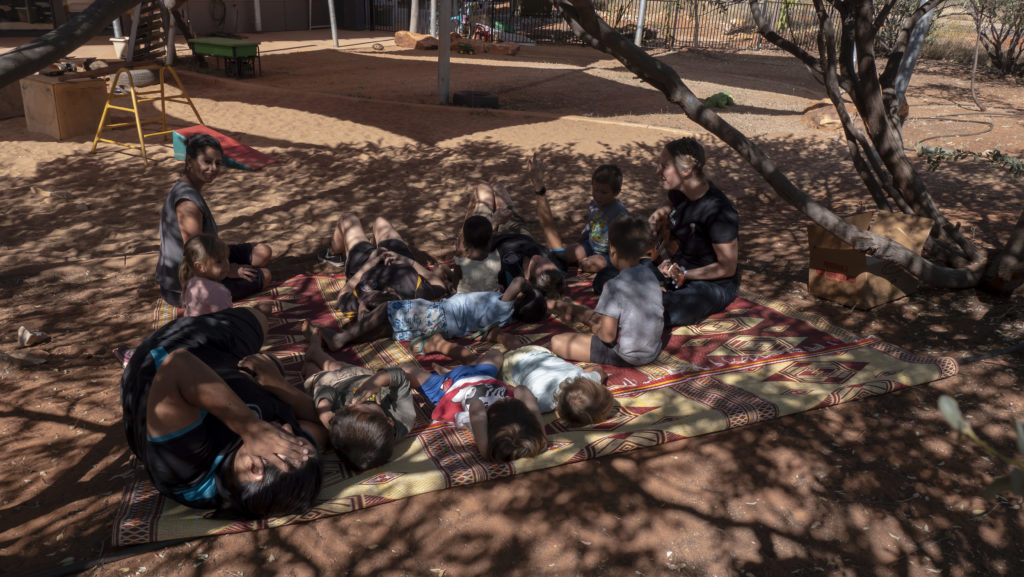 ‘Sleeping under the stars’ – Gillian Howell with the Jambila group

I’m hoping that this journey workshop model might provide additional inspiration for the music activities already happening in the kindergarten with the local musician and teacher. Next time I’m back we can hopefully develop some more material together.

On Thursday morning I worked with the Senior students again. One of the group has been doing an internship at the Nindilingarri Studio; another has a part-time job at the local radio station. The latter asked if we could help create some ‘atmospheric’ music that could be used to enhance locally-produced radio programs and interviews, so the Senior students and I decided we could record some ideas in the studio and give their classmate (the one doing the internship at the studio) a chance to apply his emerging recording engineer skills to task of recording some more unconventional percussion sounds. It was a very creative morning, where we recreated some of the experimental and unorthodox sounds we’d put into our ‘Wet Season’ composition during my residency in 2017.

In the evenings this week I created an accompanying soundscape that could represent the cool, dark, echoing dampness of the cave in which Jandamarra hid, and where he heard the voices of his ancestors urging him on. To make this, I asked the children to thing about what the ancestors might have said to Jandamarra at that time. What might he have wanted them to say, after all his efforts, courage, and suffering? The children had many suggestions:

We’re gonna calm you down.

Mulla I can see your paining.

We will heal you. We gonna fix your shoulder.

I recorded the children whispering these lines one by one, and also whispering Jandamarra’s name. We learned how to do a ‘stage whisper’ and experimented with different ways of saying the words – slowly and spookily, more urgently and dramatically, and so on.

The residency ended on Friday with a sharing and filming of the 4-5-6 students’ ‘Jandamarra’ project. This also contibruted to National Reconciliation Week and its theme for 2018, Don’t keep history a mystery.

We presented their music in the school’s performing arts studio, adding fresh coloured gels to the lighting rig, and transforming what had been a fairly unadorned ‘black box’ into a far more theatrical and atmospheric performance space. I was so proud of the students. We’d worked incredibly hard to bring three distinctive and highly original pieces of music into existence, in the space of just five days and four teaching occasions.

I was also delighted to hear the students sing the song they’d composed with so much energy. I sensed a strong sense of ownership of the song, pride in their words and melody, and pride in the story they were telling. Plus, it’s a catchy song, and fun to sing. Nothing more satisfying than hearing children sing a song they like in big, strong voices!

I’m en route back to Melbourne now, but already looking forward to my next residency in Fitzroy Crossing in just a couple of months time.

The story of Jandamarra, as composed by students in Years 4,5 and 6, Fitzroy Valley Distric High School

Hero of the Kimberley

He fought for the rights of the Bunaba people

Leading them to victory.

[Verse 1] He learned to shoot from a galloping horse

But the stations’s fences stopped his people hunting, fishing, living.

[Verse 2] He charmed police with his cheeky grin

And helped them catch his uncle.

But Ellemarra fixed his eye on him:

“Remember who you are.”

His flesh came off with a ricochet

And into the cave he crawled away…

As a man of magic power.

He could fly through the air and disappear

Like a shadow or a ghost. And he had no fear.

[Verse 5] That mapurn* man from the Pilbara

Helped the police to catch him.

He was crying as he took aim.

Jandamarra died in his own creation place.

[Verse 6] Right throughout the warrior’s life

Women were always there.

Helping him fight so the country could be theirs… AGAIN.