A major focus of both my residencies in 2019 has been to co-write songs with language teachers that they can use as teaching resources. The songs they have composed feature key vocabulary and sentence structures that they are teaching in their classes. Last residency, I worked closely with Irene, Walmajarri teacher at Bayulu School, and she and I wrote two songs together. One tells the story of her people, the Ngurrara people, coming out of the desert to work on the cattle stations, many of them settling in the towns and communities of the Fitzroy River. The other, Ruwa Parlipa Yani, is about hunting, and tells of going hunting for bush turkey (‘pinkirrjarti’), catching it, and bringing it back home to share with all the family.

My second 2019 residency saw me adding a further two verses to Ruwa Parlipa Yani with the Walmajarri teacher at Fitzroy Valley School (with Irene’s blessing). The Fitzroy Valley teacher and I went on to create another new song, also describing different animals, but this time using the teacher’s existing resource, a question-and-answer sentence structure asking ‘which animal is looking for water?’ In each of the answers, a local animal is mentioned, reinforcing that vocabulary and the grammar.

In these songwriting projects, the language teachers develop the words. I listen closely, in order to get a clear sense of the rhythmic phrasing of the words and how they run together, and with a particular alertness for any hints of melodic shape or phrasing that their repetition of the words might reveal. Even the slightest or most subtle hints of pitch variation can help the melody for the song emerge. I want them to trust their instincts, so I aim to amplify their early ideas with my own voice, accompanied by the ukulele. Any lingering shyness or cautiousness around their own songwriting capacities tends to diminish as they hear the musicality of the ideas emerge. Sometimes I intervene in the lyric-writing, asking if it would make sense for a certain word to be repeated, or if there is any way to reduce the syllable count of a particular line. Songs are much easier to learn when the rhythmic phrases flow with a degree of relative balance or consistent shape, and I try to help shape the songs in these ways, while making sure I honour the teachers’ priorities about the vocabulary that needs to be included, or the feel they are looking to create.

In this residency, I also held a songwriting workshop with the three Gooniyandi teachers who work at Fitzroy Valley and Bayulu schools. They share resources and follow similar teaching programs, but they don’t necessarily get to meet up regularly to develop new materials collaboratively. One of the teachers suggested that ‘Our Precious Trees’ could be a good topic for a song, as they were planning to use local trees as their language focus for the coming term’s lessons. The song flowed from that starting point.

We decided that three verses, with one tree per verse, would be enough material for the children to learn. They chose three trees to describe: the first, gooroo, has medicinal properties. You can chew its leaves and bark (I think that’s right) and then spit the paste onto a sore or bite on your skin. The first verse says in Gooniyandi:

If you get poked by the catfish,

Go looking for the gooyoo tree.

Chew its leaves, then put the paste on your sore.

The second verse tells of the birlindi tree, which bears edible fruit (‘If you are hungry, go looking for the birlindi tree to find a snack’). The third verse describes the paper-bark tree: the bark of this tree is used to wrap fish in, in order to cook it in the fire (‘if you catch a fish, go looking for the paper-bark of the goorromba tree, wrap the fish in the bark, and cook it in the ground oven’).

As the song took shape, the women began to joke and nudge each other, imagining the song being heard by others and shared more widely. ‘Hey, we can put this on the radio!’, said one. ‘People will hear it, they’ll be learning it. We’ll be famous!’ The idea of them singing on the radio was clearly an appealing one, as they mentioned it 3 or 4 more times during the songwriting workshop. I reckon this song – Yarrangi Joornanygarra GIriliyarndi – will get airplay too. It’s very catchy! 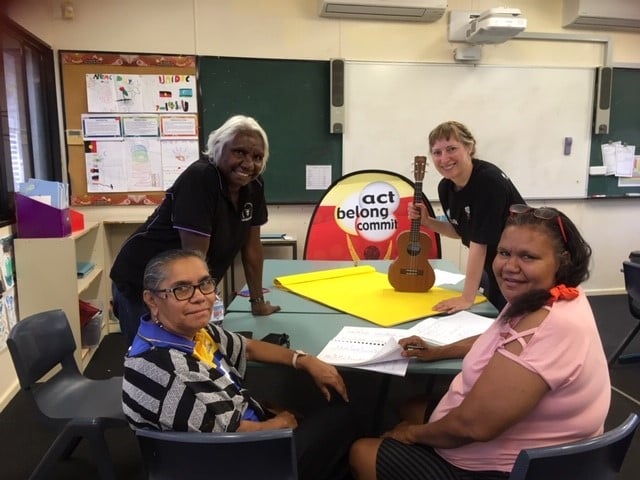