For the last few residencies, I have instituted a daily singing practice with the primary school students. They begin each day with sports – physical exercise that gets them moving and playing energetic games. Following this, they sit down and do the Breathe Blow Cough routine, a series of activities for young kids to teach them to blow their noses fully and cough into elbows in support of good respiratory and ear health. Breathe Blow Cough is a regular feature in primary schools across the Kimberley.

I’ve been taking advantage of having the whole primary school sitting together every morning to get them singing. Certainly, singing supports the goals of Breathe Blow Cough and daily exercise, encouraging deeper breathing and expansive lung action. But it also can promote other benefits, such as feelings of social bonding and connection, and the release of beneficial endorphins and neurotransmitters like oxytocin, improving mood. It also engages the brain and the memory, with the opportunity to sing words rhythmically helping to reinforce language familiarity and fluency. And it is fun. A short, five-minute burst of singing at the start of the day doesn’t really have any downsides. 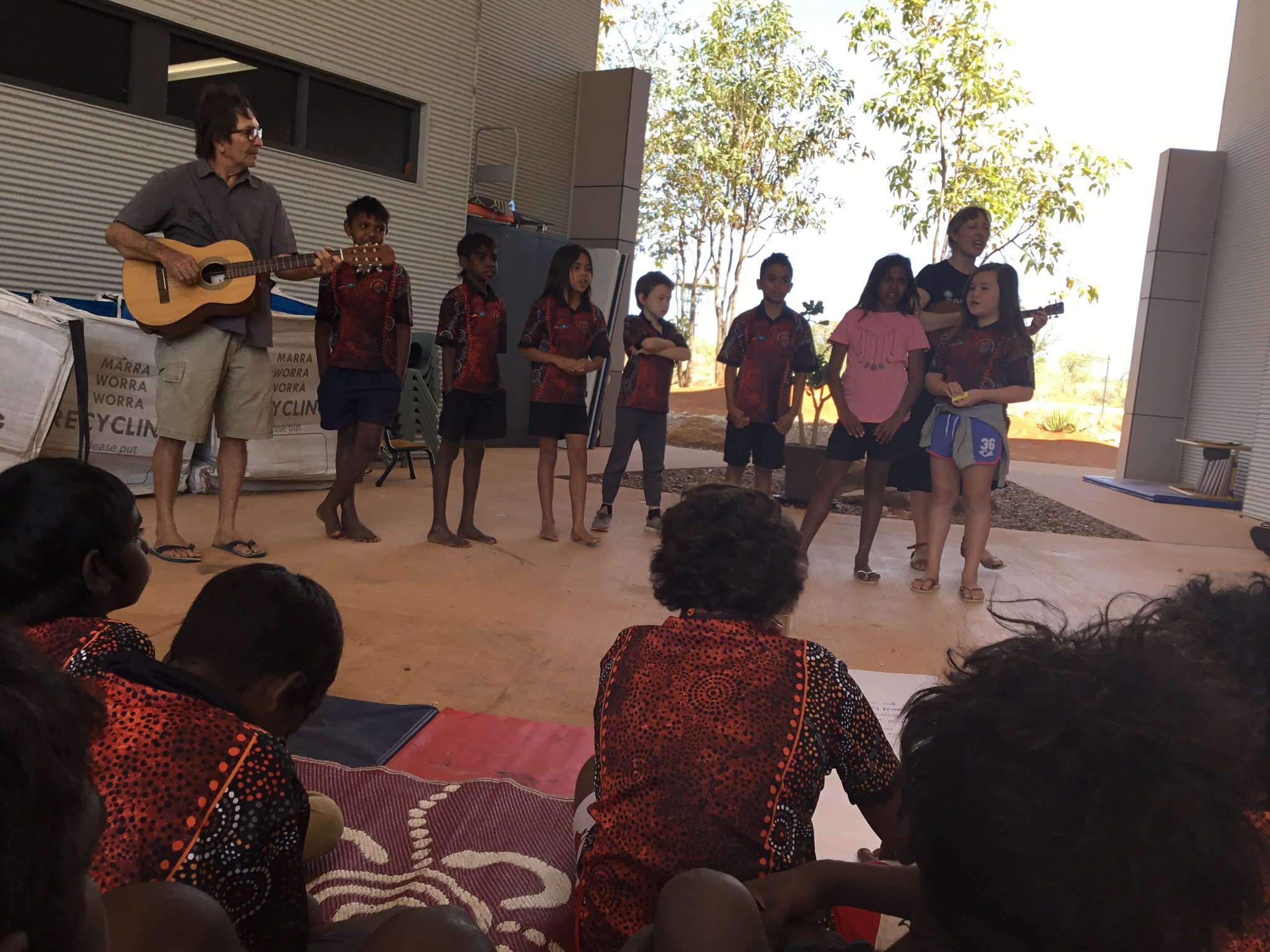 When I first began the Morning Singing, the children sang very quietly. It seemed like there might not be many opportunities for singing during a regular school day, so that no-one was really practised at singing in a big group, or that there was self-consciousness attached to it. But last residency I observed something else – that when the children felt confident with the song we were singing they would sing out in big strong voices. When it was a new song, they were more subdued. This might seem obvious, but it isn’t necessarily a consistent pattern in other schools I’ve worked in around the world. I’ve found that every social group has cultural norms around singing (who sings, when, how loud or enthusiastically, how others respond and in what contexts, etc) and it can take some time for the layers that make up those norms and tendencies to reveal themselves.

With that knowledge in mind, I’ve focused this residency’s Morning Singing sessions on introducing new material in the context of familiar songs. I’ve focused on leading/teaching songs that have been composed during the residency (like Jandamarra and Flow and My Mobile Heart) as these already find interest among the students, and they already know them a bit. The fact that these come from this community, that is, they have been composed by students in this school provides an added motivation for singing them.

And in response, I’ve heard some really BIG, enthusiastic singing most mornings! Jandamarra remains the most popular across all the classes, but My Mobile Heart also inspired some big confident voices, and Flow – which the children hear every morning as it is the school’s ‘start of the day’ bell music – is familiar to all of them as well. I’ve been seeing much less self-consciousness in the singing, and far more confidence and self-assuredness. Individuals will sing out even if their neighbours on either side aren’t really joining in. And over time, the Morning Singing has enabled me to build friendly, familiar relationships across all the year levels. 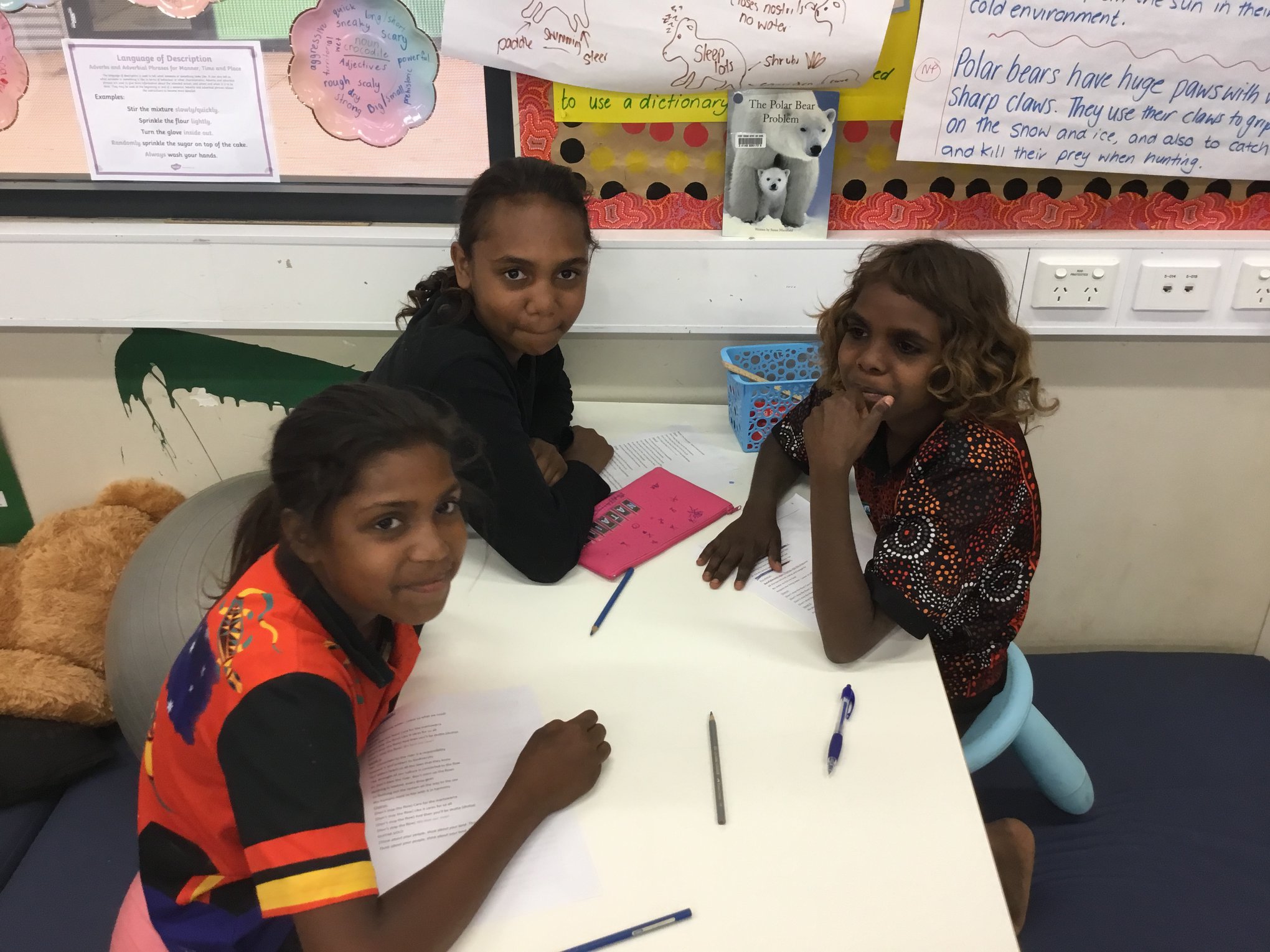