This blog post is by Gillian Howell – Tura’s current Musician in Residence in Fitzroy Crossing, Kimberley, WA. This is part of a three year program supported by Healthway, promoting the Act-Belong-Commit message, and The Ian Potter Foundation.

Last time I was up in the Fitzroy Valley I spent a morning out at Bayulu Remote Community School, a primary school that is situated on Gogo Station, just a short drive off the Great Northern Highway. I ran some introductory music workshops with each of the classes and met the teachers, planting seeds for a more extensive engagement on my next visit.

One of the first requests made during that reconnaissance visit was from the Indigenous Language Teachers. “We’d love to do some songwriting in language,” they told me. As a result, on this residency (my fourth with Tura in the ‘Music in Community’ twice-yearly, 3-year residency) I’ve been spending each Friday in Bayulu School, and songwriting with the Language Teachers has been a real highlight.

I’ve been working with Irene, the Walmajarri teacher. Irene is wonderful to collaborate with. She comes in with ideas, she suggests words and melodic shapes, and thinks in song shapes. Our track record is a song a week. The first song is very quiet and contemplative. It tells the story of the Ngurrara people (her people) coming out of the desert and going to work on the stations. It explains why the Walmajarri-speaking mob spread out so far from each other, and how their shared language kept them connected over the distance. So far we have two verses, in English with some key words in Walmajarri. Hopefully this week – our third – we will create a third verse that tells the story of the Ngurrara people returning to their homelands.

Ngurrara people coming out of the desert

Travelling northway, onto the station

Working for kartiya but carrying the traditional ways.

They never knew they’d be gone so long

But they never forgot the way back home.

They knew the track

To take them back

To their homeland Ngurrara country.

To their homeland Ngurrara country.

Another song is in the Walmajarri language entirely. It is a song about hunting and fishing. I learned some of the words in the process of writing it (reinforced by participating in one of Irene’s language classes with Year 2 students, where we played ‘Bingo’ with pictures and matching words. I did not win).

We will record the songs together before this residency ends, and we hope that students in the school can also learn to sing them. 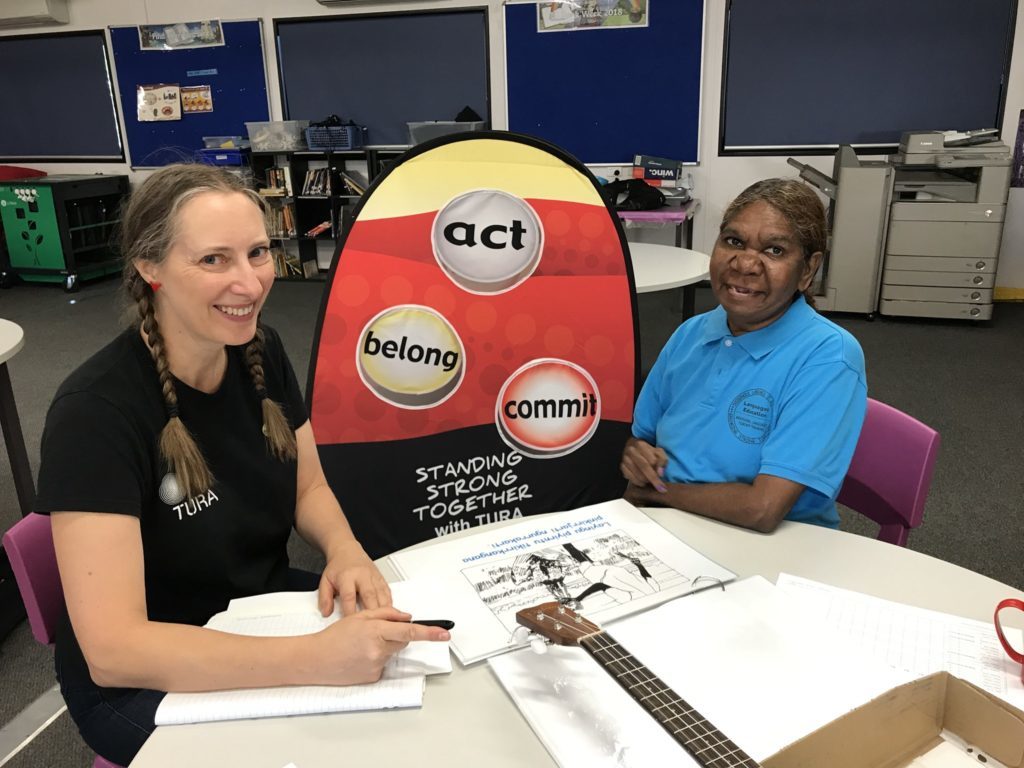