The Fitzroy Valley New Music Project: Singing for and to the Fitzroy River

This blog post is by Gillian Howell – Tura’s current Musician in Residence in Fitzroy Crossing, Kimberley, WA. This is part of a three year program supported by Healthway, promoting the Act-Belong-Commit message, and The Ian Potter Foundation.

The theme for this residency is ‘flow’. This word came to the fore in last year’s project with Year 8 students, when they created a song about caring for country and keeping the river healthy and free from plastic and other rubbish and titled it “Don’t Stop the Flow”. The concept of ‘flow’ is multilayered in local Indigenous worldview, applied to aspects of health and wellbeing for people, the river, and their interdependence, and it seemed there was a lot more to explore creatively with that as a central theme or creative point of departure.

Working this time with Year 6 students, we brainstormed ideas about what flow means, and what they feel the Fitzroy River brings to their lives. The students’ responses were rich in their detail. Some of them drew pictures of their favourite river places, and described the environment and all the things they could do there in great detail. Two girls described the spring at Yirrmalai (a nearby location, a couple of hours drive away, they thought), sharing stories of its cold, clear water, the healing powers of the water, and of a rope swing over the main waterhole.

Another boy talked about how going to the river helped him relax and feel good. It calmed down his head, and he loved to go there for swim and fishing with his mum and other family members.

Then I visited the Pre-Primary students and asked them about their river experiences. They described long drives, catching fish – with a net you could catch ‘big mob – and looking out for crocodiles. As we talked, their teacher wrote down their answers and descriptions, taking care to use their exact words.

We rehearsed the song over the next week, and then in the third week of the residency, the Year 6 students, their teachers and I went to sing it to the river. A few people came to hear us sing, but that wasn’t the main purpose – the main purpose was to sing it to the river, to offer it as a gift, to let the river know how important it is. The song became one of the ways for these children to enact their responsibilities of care for the river, embodying the Act – Belong – Commit message of Healthway, sponsors of the Fitzroy Crossing residency.

I’ve never heard them sing as proudly and beautifully as they did when they sang to the river. During the singing, a flock of cockatoos flew over and perched in the tree branches closest to where we were singing. They squawked and chattered throughout the song. This seemed like an endorsement – or at least an impact!

As we walked back to the bus, one of the students said that she thought the river would be proud of them for their song and their singing, and their commitment to country. 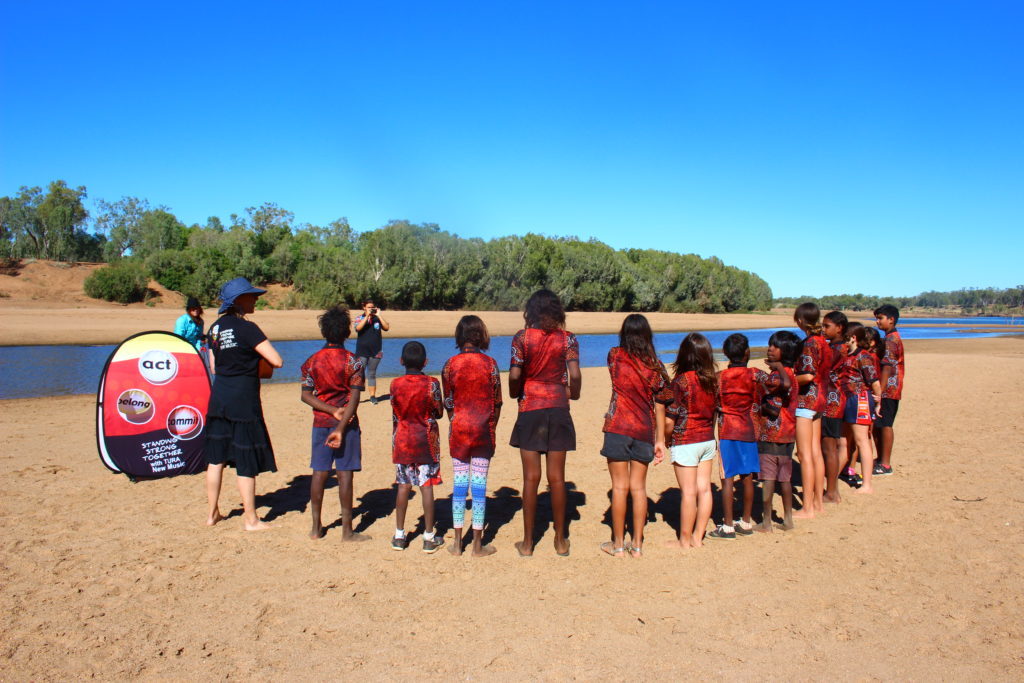