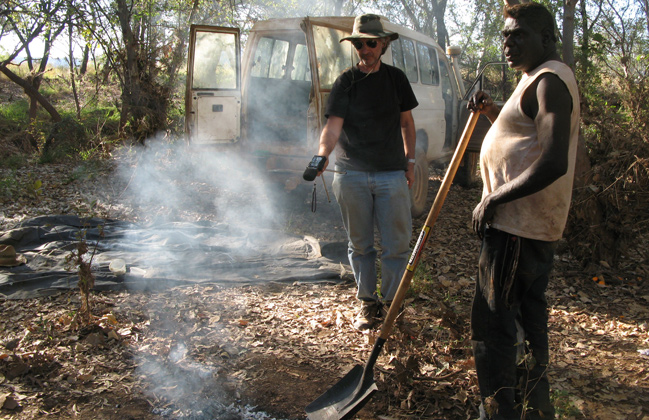 We devoted the weekend to recording in and around the Bungle Bungle ranges located around 100 kilometers south-east of Warmun. The primal undulating landscape obscured the ranges right until the last moment providing a great sense of anticipation as we negotiated deeply corrugated roads and numerous river crossings. As spectacular as the Bungles are, our ears were quickly drawn to the assorted acoustics formed by the various chasms and gorges located throughout the ranges. The variety of vertiginous spaces generated an amazing range of reverberant effects imbuing pedestrian birdcall and insect song with a profound eeriness. Their voices bouncing through the vast natural labyrinth whilst assorted palm trees created waves of crisp noise in response to the gentle breeze that blew from time to time. Whilst daytime was good for soloists, evening provided a great opportunity to capture choruses of insects and frogs performing under a full moon in the numerous creeks and pools dotting the area. A good weekend in which we were able to capture some of the natural environment to compliment the many recordings we have to date of the reconstruction of Warmun. 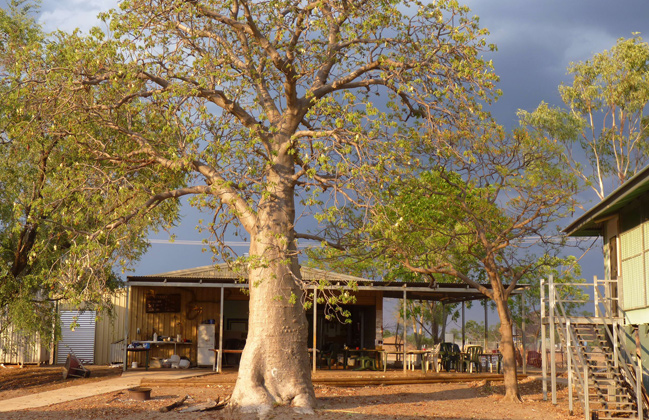 We have been concentrating on the effects of wind over the past few days that have sprung up with some intensity to signal the change in seasons. The calm, still days that greeted our first week at Warmun have been dramatically replaced by blustery conditions whipping up sand and dust around the township. Wind though always provides a good opportunity to record rustling, creaking and groaning noises as it activates various surfaces and objects including trees, grasses, fences and buildings. In addition to recording the dynamic conditions we have also been busy presenting our work to the children of the local school who have been able to identify many of the strange sounds that we have collected in and around Warmun. A particular favorite is the recording we made of the didgeridoo that often resulted in children bursting out into spontaneous dance, which was quite delightful.

It has been a long hard week of field recording in and around Warmun. The week commenced with a trip to the abandoned Texas Downs cattle station about 50 kilometers East of Warmun boarded by the ancient Osmond Range. Texas is an expansive cattle station comprising a homestead and various sheds and cattle pens.

The turbulent wind that has been blowing for well over a week provided additional opportunities to record creaking metal, shuddering gates, and groaning windmills – an eerie soundtrack to this remote and forgotten place. The next day we joined Gabriel and Owen and various family members on a hunting trip near the Argyle Diamond Mine that culminated in a wonderfully prepared barbeque featuring three bush turkeys and a freshwater crocodile. The sounds of plucking, cutting, and sizzling were our main focuses a long with the collective devouring of the freshly caught animals.

Later in the week we travelled out to Wolfe Creek Meteorite Reserve to record the White-Gaped Honeyeater echoing within the crater which features a wonderful array of Grevillea, Wattle, and Hakea bushes. On the way home the darkened mountain ranges surrounding Warmun were illuminated by widespread bushfire ferociously raging by the Great Northern Highway. A strange and mesmerizing site that provided another recording opportunity to capture the sound of combusting undergrowth sizzling and crackling across the plain.

On the road to Warmun 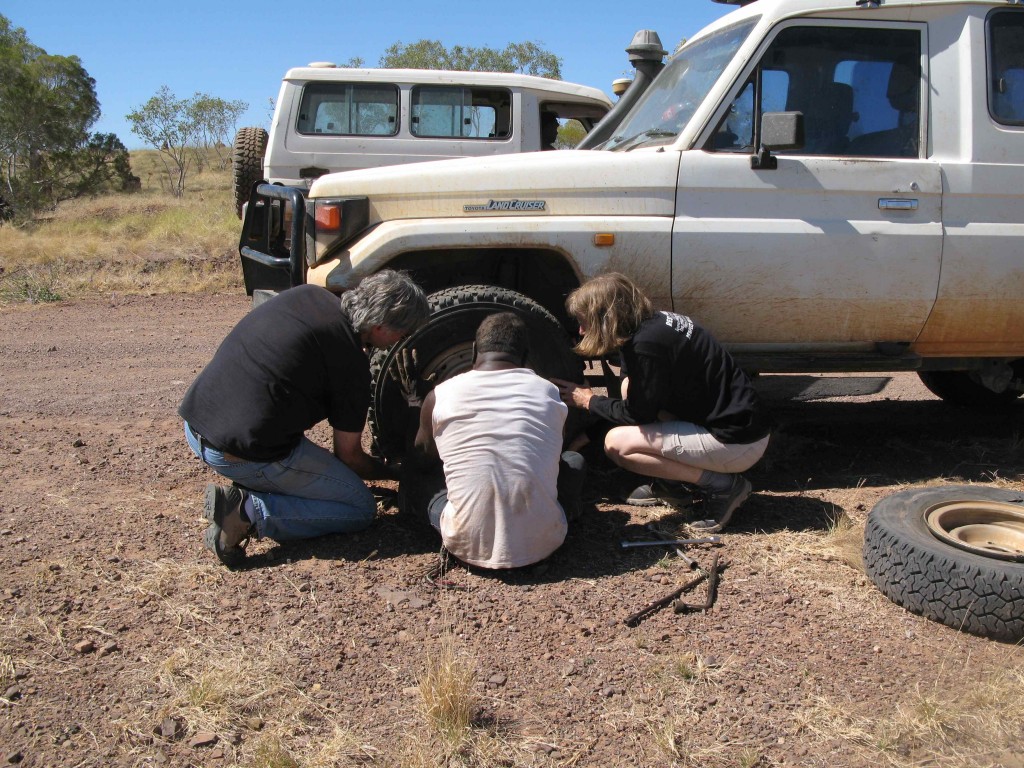 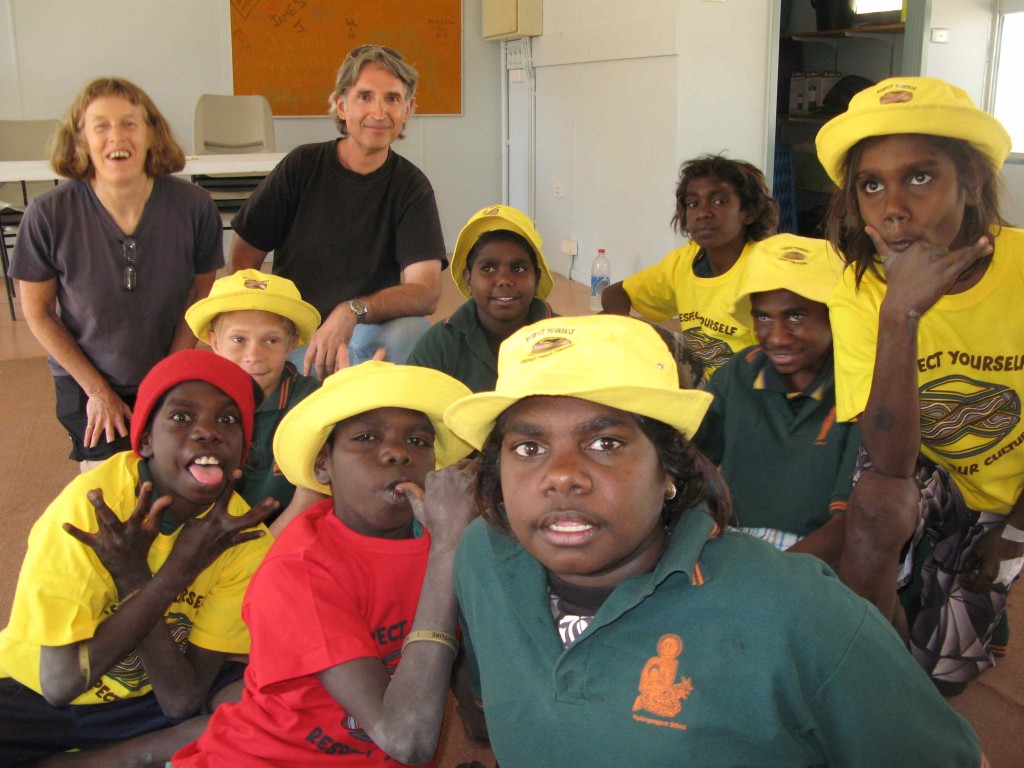 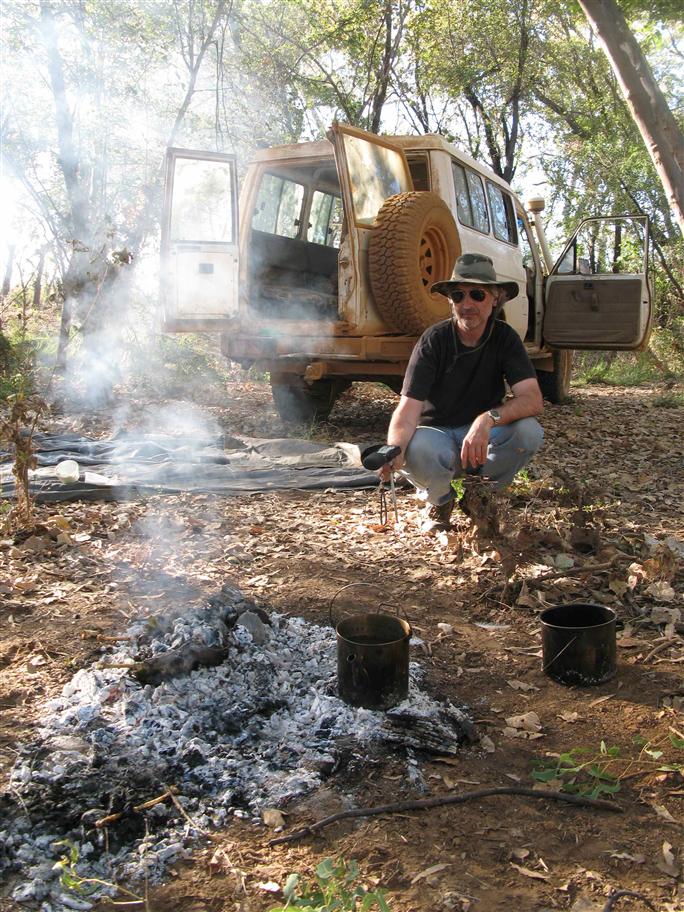 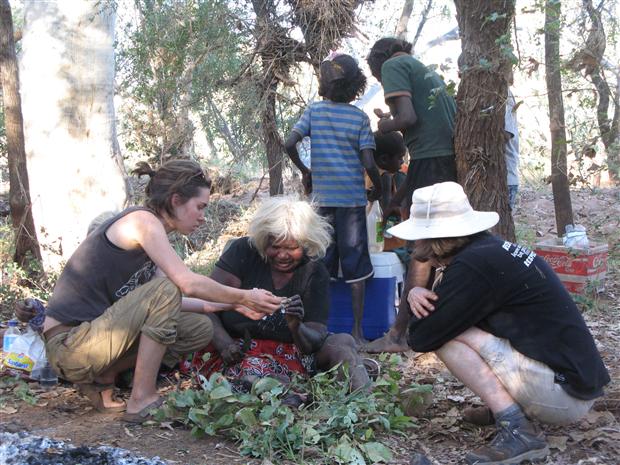 We have spent the last few days undertaking an orientation of the settlement, which is undergoing massive redevelopment since the floods in March when 130mm of rain fell in 24 hours inundating the community. The damage is extensive with overturned cars, abandoned buildings and wrecked infrastructure strewn throughout the township. It is hard to imagine that the seemingly placid Turkey Creek is capable of such widespread violence. With disaster though comes opportunity with a team of workers busy repairing or replacing much of the damaged infrastructure and housing, although the process is going to be long and hard considering the havoc that has occured here. From a sound recordists perspective the redevelopment has provided an enormous source of industrial noise that has marked Warmun as a dense urban environment rather than the outback settlement that it actually is. The disparity between the natural splendor and the noise of reconstruction has been of particular interest during these first days in the community.

Warmun is located about halfway between Kununurra and Halls Creek in the North East Kimberley. The area itself is noteworthy for its amazing series of hills and ridges, and the majestic Boab tree dotted across the landscape. The drive from Kununurra was uneventful for the most part with only the odd campervan and road train interrupting the relatively still environment. As we drew closer to Warmun the horizon was filled with plumes of smoke from the back burning taking place. The closer we got to settlement the blacker the landscape until we encountered massive flames engulfing the long dry grass bordering the Great Northern highway. Along with the bright orange and yellow flames was the roaring sound of fire overwhelming all before it. Our first recording opportunity in the Eastern Kimberley turned out to be one of the most dramatic one could possibly wish for.  After battling the cracking noise of the flames with our faithful microphones and recorders for an hour, it was time to continue on to Warmun to see what other strange encounters await us.