Last week Tura’s Artistic Director Tos Mahoney along with sculptor and sound artist Jon Tarry have been prepping the old ‘moda car’ (The Wreck) in its current digs – the overflow camp shed in Warmun, south west of Kununurra, east Kimberley – ahead of small clan of WA creatives who will gather in Warmun to bring the sonic sculpture back to life. This will be the first time the Wreck is performed since it was developed by Jon Rose and the Warmun community in 2017. 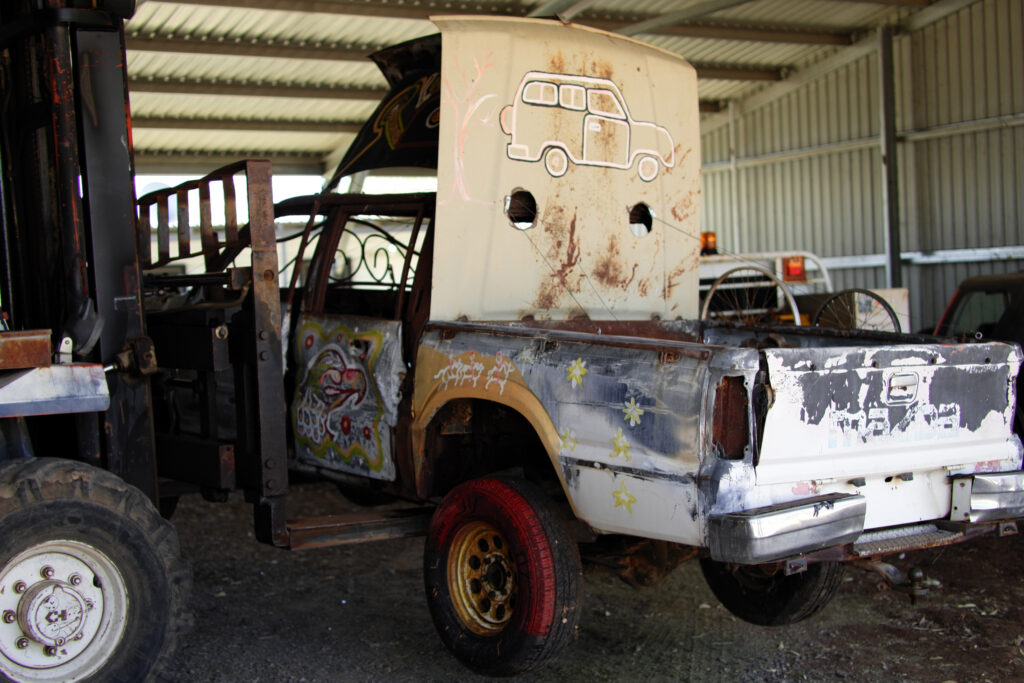 The Wreck by Jon Rose. Photo by Jon Tarry

The Wreck has since been painted by Gija artists. Over the years, there has much documentation made about The Wreck, the paintings, the stories and other wrecks.

In 2020, The Wreck was acquired by the WA Museum Boola Bardip. Destined for permanent installation in Boola Bardip, The Wreck will be the subject of a 3-week performance and exhibition tour from Kununurra to Perth in May/June 2023.

This week, Tos and Jon were joined in Warmun by musicians Genevieve Wilkins & Tristen Parr, videographer Laure Bernard, photographer Jessica Wyld and sound engineer Guy Smith. The group has been working with students at Ngalangangpum School and members of the Warmun community, who will join in a special performance of The Wreck this Thursday 21 October 5pm at Ngalanangpum School.

This further development of The Wreck is made possible through the WA Dept of Local Government, Sport and Cultural Industry’s Made in WA fund.